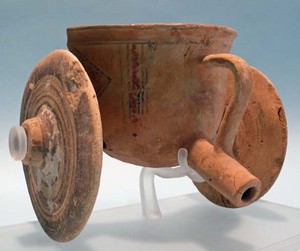 Terracotta, Late Geometric or Early Archaic, Bichrome Ware chariot. It was sold to me as Archaic I but the Metropolitan Museum has a very similar chariot body which they date as Geometric III. There is a very similar chariots in Berlin and in the St Barnabas Monastery Museum in North Cyprus, and another depicted in Desmond Morris's book of his collection. V Karageorghis says that these chariots without horses date from 8th and 7th century BC and  12 are illustrated by him, almost all contain a small figure (with another 5 with 2 figures).  This small passenger or charioteer, peers over the front edge. Only the upper part is depicted, attached to the inner face of the chariot.  There is a scar in this position inside my chariot which suggests that it may once have had a similar figure. Morris imagines the vehicle as transporting the spirit to the afterlife.  Other Archaic chariot depictions, mostly votive offerings, have smaller chariots with larger figures in them, usually pulled by 4 horses (quadrigia).

During the Bronze Age in Cyprus and the Greek world, chariots were used for warfare and transport. During the first millennium and perhaps as late as the fifth century B.C. in Cyprus, and many other places chariots continued to serve both purposes, while in Greece they had by this stage lost any military function, though still retaining a strong presence in ceremonial and mythological depictions. In other areas, such as Britain in the first century AD, the chariot continued to be a weapon of war much later.

Largely wheel-made (the chariot body is a pot shape bisected vertically). Possibly a votive offering deposited at a shrine or more likely from a tomb (wheels remounted)

(Ex collection of Edwin Henry Lawrence Esq (1819-91), (great nephew of Sir Thomas Lawrence the artist), acquired with hundreds of others from Alessandro Palma di Cesnola (his future son in law) after financing Alessandro's excavations. Most were excavated by him in 1876-78, largely with a view to turning a profit on the sale of the antiquities. (A few of the Cypriot items in fact originated in the excavations of Alessandro's brother Luigi who had left Cyprus in 1876.). Attempts to sell the entire Cypriot collection to the British Museum and South Kensington Museum proving unsuccessful, Lawrence disposed of almost 14,000 items at Sotheby's between 1883 and 1888. A fourth lot was sold in 1892, the year after his death. Buyer of this piece not known. Bought by me from Griffin Gallery USA, having been in the private collection of owner Clifton McCracken, acquired 1999 Bonhams Auction Lot 52. The opening text of the catalog states that this was one of the most comprehensive auctions of Cypriot artifacts in several decades. “The antiquities are from a Private collection formed primarily in the 1970s. The artifacts were purchased from other collectors and War correspondents who obtained them in the 1940s.. ….Lots 1 - 95 are mostly from the Lawrence - Cesnola collections, names synonymous with Cypriot archaeology and collection.” Name of the 1999 seller is not given, I will enquire if Bonhams know.) 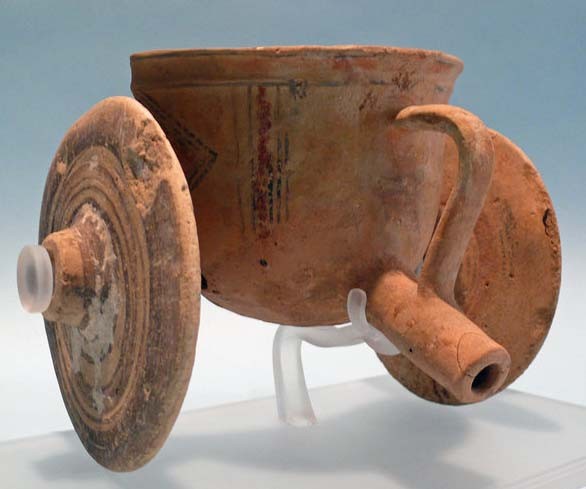