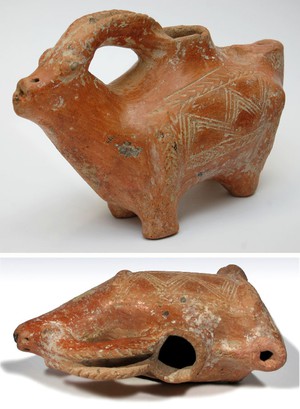 Incised Red Polished Ware. A very unusual jug or possibly a rhyton (drinking vessel) in the form of a goat (Bezoar Ibex) with back-swept ribbed horns which form a handle. The mouth forms a spout for drinking or pouring but the nostril holes are shallow. There is an upstanding filling-hole in the middle of back and another hole with un-slipped edges in the upper buttocks which probably indicates a missing upturned tail-spout (found in many animal jugs of the Early and Middle BA) which has been smoothed and coloured to hide the break. Goats do, in any case have an upturned tail. It is one of the differences from sheep.  There is also an anal hole which does not communicate with the interior (or is this a messy, shallow TL test hole).

This Jug has been TL tested at the Oxford Authentication Laboratories (samples taken from undersides of belly and foot), and confirmed as ancient. Stylistically the form of this goat has no precedent that I know of. However, taking the possible date as the normal 20% on each side of the calculated date gives an earliest date of 1900 BC, which used to be considered the start of the Middle Bronze Age (however, as I understand it this 20% is a convention in the face of numerous factors and a slightly earlier or later date is not impossible).  Representations in the Early and Mid Bronze Age include the highly stylised human “plank” figures. These were once all considered to be female, but this is widely questioned now. I believe they are ancestor figures. The animal representations were mostly horned (male) animals: principally bulls, but also fallow deer and goats. These all probably relate to a fertility cult. The same is found in traditional animist African religions. There were also some images of birds and a few elaborate “scenes” (and later a very few sheep and pigs).

Neolithic settlers had introduced goats to Cyprus, plus dogs, sheep, fallow deer and probably pigs and a few cattle, which were probably left wild. The cattle died out in the 8th millennium BC but were reintroduced in large numbers in the Early Bronze Age.

(Ex private collection Mrs Berki, acq in the ME in the 1980s) 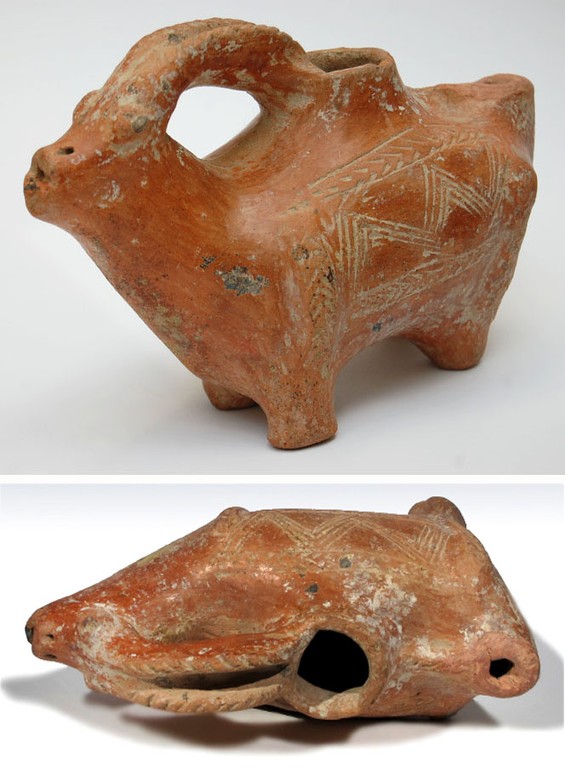