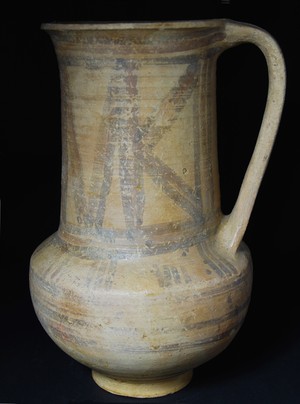 At one time this was called Cypro Palestinian Ware, because it was almost identical to wares made at the time in what is now Palestine and Syria. At one time thought to be an import from that area, this ware, including a large proportion of the examples found on the mainland, was proved by petrographic analysis of the fabric to be made of Cypriot clay. The first pottery made on the potter’s wheel in Cyprus, along with Red Lustrous Wheelmade ware from the North, it did not lead to the general use of the wheel for other Cypriot wares in Cyprus, such as the ubiquitous Base Ring and White Slip wares, though probably Black Slip and Plain wares may now be considered native and contemporary. Once considered to have been made only briefly on the East coast, perhaps by by immigrant potters, it is now clear it was also made on the south coast and exported to the Levant and Egypt, where it was copied and where, along with exported Cypriot Base Ring Ware, it has become an important date marker. It was not until Cypro Mycenaean wares from the 12th and 11th centuries that the wheel was dominantly used in Cyprus and not till the Iron age that it became almost universally used.

This relatively rare ware comes in a restricted range of shapes, chiefly tankards, jugs, kraters and shallow bowls with a handle.  The colour is generally strong with, typically made up of red stripes between two black ones.  My piece was unfortunately varnished by Mayer-Riefenthaler which makes it look a little strange, and the attempt to remove some of the varnish has left it with a strangely banded appearance as the remaining varnish settled into the ripples.  It has clearly shed much of its colour, but the scheme is still clear.  To my eye, though, some of the soul of the earlier handmade wares seem to have gone from it, elegant though the shape is.

A piece of the upper body was broken off in being couriered to me (along with worse breakage to  the other piece it was packed with). It has been invisibly mended back to the state in which it was dug up (a practice I do not favour with ancient breaks where I prefer the mend to be visible, but here restored with reference to pre-breakage photographs).  Along with several other pieces, it had been varnished by the last owner, so at the same time I had much of of the varnish taken off by Colin Bowles, the restorers. As with the others, they did not risk removing all the varnish since they thought it had probably bound in with the paint it had perhaps been applied to protect.

(Collection General, Surgeon Dr. Josef Mayer-Riefenthaler, Vienna. Acquired in Cyprus in the late 1950s or 1965-7, during his deployment as UN soldier. Many of his pieces were bought from Cypriot museums and retain their acquisition numbers.)