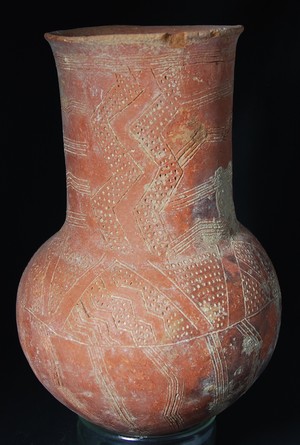 Another very similar Red Polished Ware pot, continuing the dominant ware of the Early Bronze Age. Here however there are no small handles, lugs or applied eyebrows, but instead a single handle as for a jug or tankard (not visible in this photo), and a very elaborate incised pattern over the whole surface, including profuse vertical zig-zags. As in almost all Middle Bronze Age wares, the base continues to be rounded. After the Philia period, flat bases were almost never made in Cyprus till Late Bronze Age, Base Ring Wares and a few wheel-made wares, including imitations of Mycenaean pottery. This pot was intact, except for an obvious small plugged hole in the side, until the upper part was broken into several pieces in transit to me with a courier. It was expertly restored by Colin Bowles of London to the state it had been in prior to this disaster, with reference to earlier photos (not restoring the older chip on the lip). Normally with ancient breaks I prefer to leave the breaks apparent.

(Ex Collection General-Surgeon Dr. Josef Mayer-Riefenthaler, Vienna. Acquired in Cyprus in the 1950s and 1960s, during his deployment as a UN soldier) 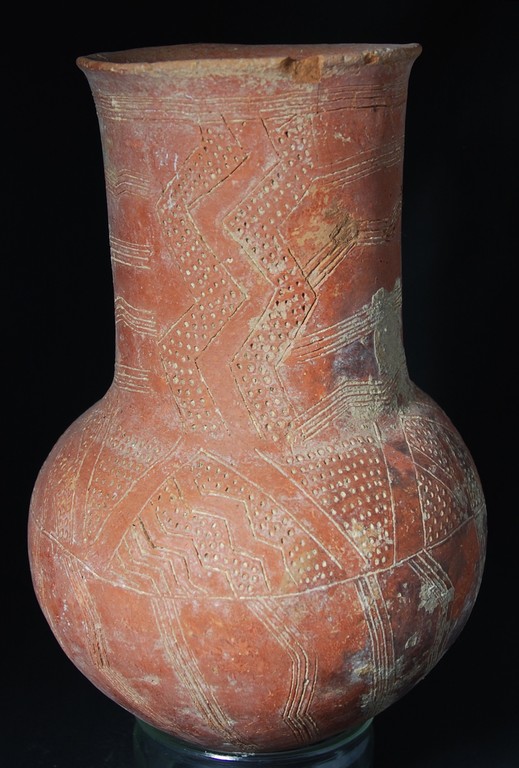