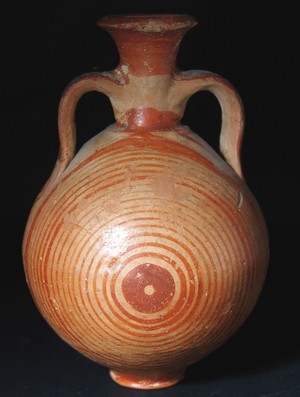 In the the Late Cypriot period, in the 14th and 13 centuries BC, which coincided with the height of the Mycenaean civilisation in Southern Greece, large amounts of Mycenaean pottery were imported into Cyprus and was put into high status tombs.  Unlike most Cypriot pottery it was all made on the potters wheel. Presumably this and my next piece were among those.  Later native potters imitated the style and forms and later adding features from their own tradition, now all made on the wheel. They were joined by large numbers of Greeks fleeing the collapse of the Mycenaean civilisation around 1200BC.  The most commonly copied form was the stirrup jar (seen my Mycenaean piece above). This  bottle with a ring base is a another typical item of Mycenaean work.  The decoration with concentric circles (presumably painted with the pot on its side on a potters wheel) is the norm and I particularly like this all red version. Normally the paint is various shades of brown, but it can turn red when well fired. Concentric circles painted in this way became a dominant motif in Cypriot Early Iron Age pottery. This is probably from the earlier period (14thC BC) as later there tended to be contrasts of tone and colour which approximate to the later bichrome wares.

The first Cypriot pottery made on a potters wheel were 2 types known as Wheelmade White Painted ware and Red Lustrous Wheelmade ware from the start of the late Bronze Age, both possibly inspired by Syro-Palestinian designs. Later the Mycenaean influence became absorbed into a Cypriot tradition which extended into the Early Iron Age until the Classical period.  In that period the immigrant Greeks gradually took over control of the culture and the rule of the emerging Mycenaean style Kingdoms, and the Greek language and writing gradually supplanted the native Cypriot.

An almost identical bottle form, or a flattened, lentoid-shaped variant, often called a Pilgrim Flask, was common in the Early Iron Age. It gets its name from the similarity to flasks carried by pilgrims in the mediaeval period.

Unfortunately varnished by the last owner. This has (mostly) been removed since the photo.

(Collection General-Surgeon Dr. Josef Mayer-Riefenthaler, Vienna. Acquired in Cyprus in the 1950s & 1960s, during his deployment as UN soldier)) 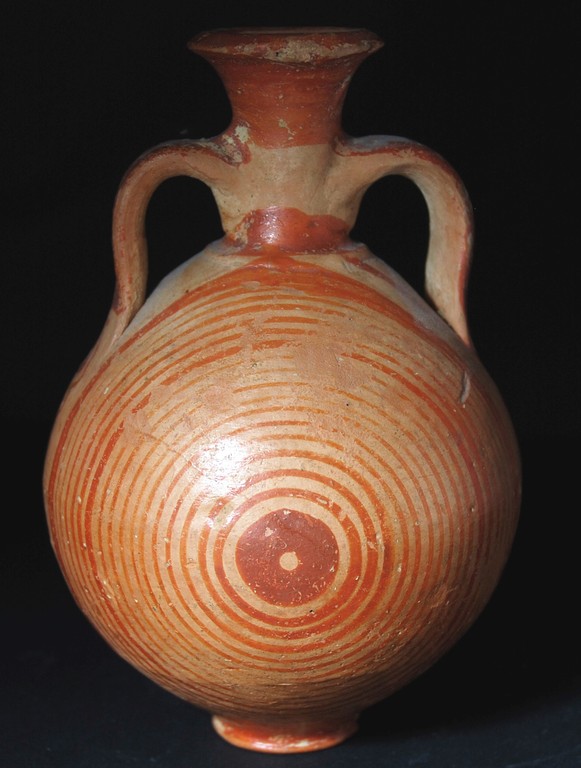