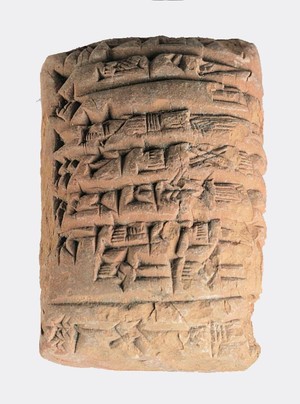 A finely preserved Sumerian clay cuneiform tablet from the city of Girsu in the kingdom of-Larsa, detailing provisions to be given to a courier/emissary travelling to Susa.  Girsu is about 75km North of Ur (Then part of the Kingdom of Isin and later of Babylon) between the Tigris and Euphrates rivers in modern South Iran. The text runs around 3 sides of the tablet.

Susa was 300km to the East, beyond the Tigris. Founded in 4200BC, it was part of the Uruk and then Elam cultures and then capital of an Accaddian province. However the governor rebelled in 2100 and at the time of this tablet it was ruled by the Neo Sumerian Ur III dynasty (who had conquered Elam) and was a literary centre. Later it became an important city of the Median and then Persian empires.

Cuneiform was among the first writing systems, impressed with a wedge shaped stylus in wet clay (Cuneform means wedge-shaped).

Emerging in Sumer in the late fourth millennium BCE (the Uruk IV period), cuneiform writing began as a system of pictograms. These became simplified and abstract, reducing from about 1000 in the Early Bronze Age to about 400 in Late Bronze Age (Hittite cuneiform). The system consists of a combination of logophonetic, consonantal alphabetic and syllabic signs.  The original Sumerian script was adapted for the writing of the Akkadian, Eblaite, Elamite, Hittite, Luwian, Hattic, Hurrian, and Urartian languages, and it inspired the Ugaritic alphabet and Old Persian cuneiform. Cuneiform writing was gradually replaced by the Phoenician alphabet during the Neo-Assyrian Empire. By the second century CE, the script had become extinct, and all knowledge of how to read it was lost until it began to be deciphered in the 19th century.

About a million cuneiform tablets have been excavated, only about one in 20 having been read and translated.  Most are administrative lists, but they also including the Epic of Gilgamesh from around 2100 - 1200BC (there are a number of evolving versions)- often called the first work of world literature, and containing a version of the flood remarkably similar to the much later one in the bible.