Incised Red Polished Ware pot, with 2 handles and two faces or bucrania.  Where not making askoi, rhytons or figurines in explicit animal shapes, Cypriot potters liked to make their pots into personages - animal or, less often, human. Two pierced lugs easily become noses with nostrils (the only part of plank figures always depicted in relief) and two applied curved lines become eyebrows, making the whole upper part of the jug into a head with a face on each side, and the lower part then becomes the body.  Although eyes are not clearly depicted the three vertical, dashed lines under the nose and eye positions might refer to them, and to the vertical line frequently found under the nose of plank figures. The horizontal patterned bands below (and in this case above) this, are identical to those on a slab figure that belonged to Desmond Morris.  The handles could even be seen as pierced ears. On the other hand they are just as likely to be intended as horned bull heads, in which case the piercing through the lugs becomes two eyes. The ambiguity may have been deliberate.

This overall jug shape was made over a long period from Early Cypriot III to Late Cypriot III (2100-1450 BC).  Intact except for small chips

(Ex Collection General-Surgeon Dr. Josef Mayer-Riefenthaler, Vienna. Acquired in Cyprus in the 1950s and 1960s, during his deployment as UN soldier.) 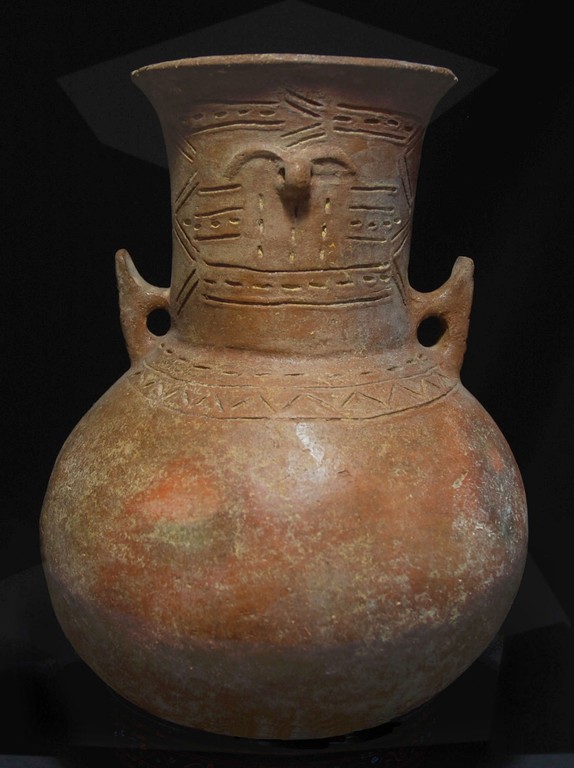