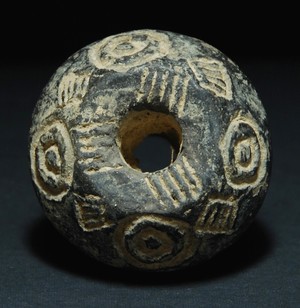 A Black Polished ware spindle-whorl for spinning thread. The whorl was placed on the spindle to give its spinning motion more momentum. Such biconical whorls are known from the Philia period. Often, especially in the Late Bronze Age, these spindle whorls were made of stone or bone. (Recently I have wondered if I could be wrong and this example could be black stone (steatite?) except it would be unusually elaborate for a stone one.)

Spinning thread seems to have been a skill that was brought by the earliest settlers and the earliest spindle whorls known in Cyprus are from such places as Choirokitia in the Aceramic Neolithic when garments are thought to have been woven from wool.

The warp weighted loom was brought to Cyprus by the Anatolians who brought bronze making technology around 2500 BC.  Goat hair, wool or flax, was carded witha kind of comb to line up the hairs and was then drawn continuously off a distaff and twisted into a thread by spinning a spindle on the lower end, which was given more momentum by having a heavier weight fitted on it called a spindle whorl.

This one appears t be Early Bronze Age, judging from the deeply incised decorative circles.  It is nearly spherical with flattened ends, rather than the more common bi-conical shape of the mid bronze age. Most seem to be 3-4cm across though a few larger ones are known. For goat hair and finer thread a smaller weight was used and since mine is at the upper end of size it was probably used for flax (to make linen), or a thicker wool thread.

Spindle whorls are particularly found in groups in female graves suggesting spinning might have been a specialised occupation.  It is striking that they were considered important enough to have been put into tombs.  Normally loom-weights, and everyday cooking and storage pots did not get included.

(Collection General-Surgeon Dr. Josef Mayer-Riefenthaler, Vienna. Acquired in Cyprus in the 1950s and 1960s, during his deployment as UN soldier.) 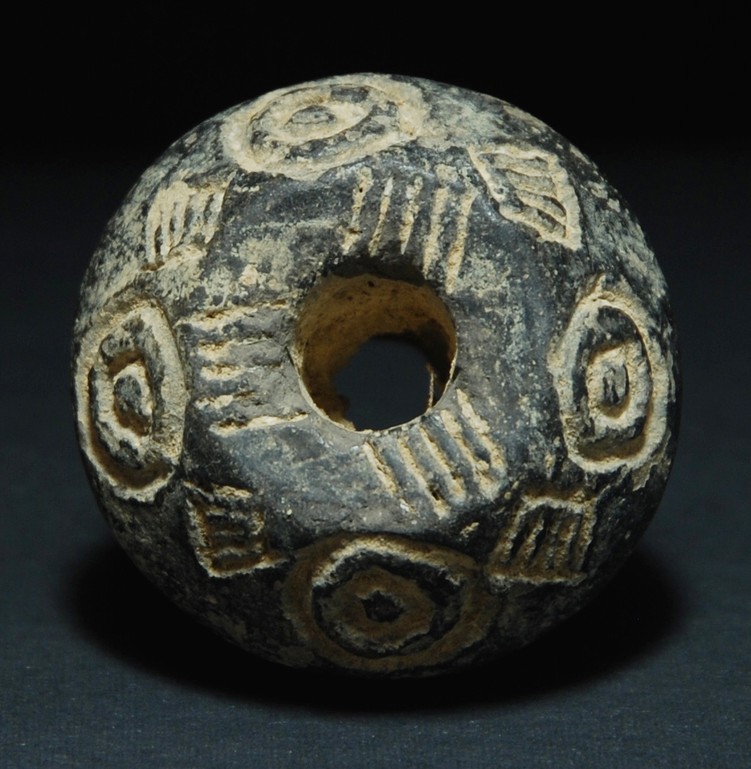