Cruciform figures made of green picrolite stone are the most emblematic remains from the Cypriot Chalcolithic period: one even appears on the Cypriot one Euro coin.  They have been found across the island but mostly in the South West.  Quite large numbers of these have been found, both in graves and in houses, including an apparent manufacturing site in Souskiou.  Frequently these are found in a child's grave and perhaps had been worn by the mother during her pregnancy (and possibly earlier to promote it).  All the adult burials containing these figures (where we know the sex), have proved to be female. Though the middle Chalcolithic starts in 3600BC, most cruciform figurines were made after 3000 BC.  At the start 0f  the late Chalcolithic (from 2700 BC) the production of figurines died out and though late chalcolithic culture continued in some areas well into the Bronze Age Philia period, the next significant production of figurines was the "plank" figures starting about 600 years later.

These images were at first thought to represent a fertility goddess, but are now generally believed to have been potent charms intended to promote successful pregnancy and childbirth by sympathetic magic. However it has also been suggested that the 2 known, very large (c 40cm) limestone versions might have been cult figures and all the smaller ones portable representations of them.   The most common type of cruciform figure are tiny and, like this one, simplified with a pierced head to hang them around the neck from a thong. The most famous types, however, are larger and more detailed with facial features and fingers, 6 -14cm high.  They appear to be in a crouching pose and all have outstretched arms and long neck, which gives them a cruciform shape. The outstretched arms are thought to refer to a birthing position, still widely used in many parts of the world, where the crouching woman's arms are supported by an assistant from behind. One of the largest of these figures has a tiny version of itself depicted hanging around its neck. There were also other figures made of limestone and pottery, some the latter depicting childbirth.  After death they were placed in the graves of women and children.

Vertical grooves on and (sometimes) between the arms, as on this one are a feature of a number of examples but it is unclear what they signify.

There is a restoration of a lower leg, more extensive on the (plain) back of this figure.  Some people like the restored sections of an antiquity to be distinct from the original parts but why this was done in such a different colour in this case is a mystery. However, judging from a photograph an eminent archaeologist thought the figure was authentic.  He thought that the fine striations were the result of both manufacture and wear and were quite typical.  This means it had been worn and afterwards probably inserted with a burial. Picrolite stone had been used for ornaments long before, and picrolite beads have been found in Acrotiri caves from 6000 years earlier.

(Collection General-Surgeon Dr. Josef Mayer-Riefenthaler, Vienna. Acquired in Cyprus in the late 1950s, or more likely 1965-(67?), during his deployment as UN soldier.) 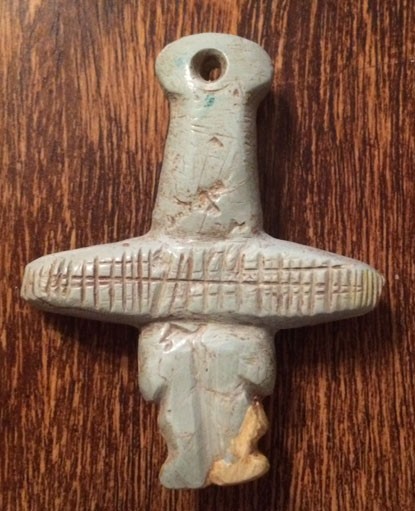