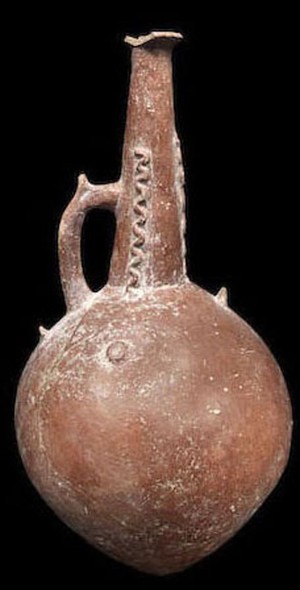 A magnificent large piece of Early Cypriot pottery from around 2100-2000 BC. The general type ceased to be made in about 1950 BC and the size of this one suggests it is not from the start of the period. Middle Cypriot wares were seldom so large. It is also thick walled and heavy (4.5kg).  Red Polished ware was made by covering the pot in iron-rich red slip which was afterwards polished. This applied relief decoration   (here 3 snakes, plus 2 rings) was an alternative, on early pots, to the more frequent incised decoration. Snakes are believed to have been considered as chthonic creatures (ie relating to the underworld of the dead) since they often come out of holes in the ground.  They are also associated with rebirth because they shed their skin. The 3 protruding decorative spikes are probably a stylized form derived from lugs on earlier pots. The jar would presumably have sat on a wooden or straw (or even pottery) ring as happens in some cultures still, or even in a hole in the ground, as happened with Roman storage amphorae which could reach enormous size. However this was clearly a prestige item, probably needing to be fired on its own.

Such vessels were presumably used to serve water, wine or beer during feasting. Like almost all of these large flagons, or intact vessels of any kind, it must have been found in a tomb and would have been used at the funeral feast. Priscilla Keswani has convincingly argued that by th e EC III the norm was an initial temporary grave and, months or even years later, after the flesh had been removed from the bones, the repackaging of the bones in a communal grave of the kin-group, which was sometimes used for hundreds of years. It is likely that this second funeral, often reburying several individuals at once and probably celebrating their rebirth as ancestors, would normally have been the main occasion for sacrifices, feasting and drinking, and the offering of grave goods such as this flagon - the interval between having allowed time for making such items and collecting resources for the feast. It is probable, though unproved, that such vessels were also used at other communal events.

Repaired and missing part of lip. 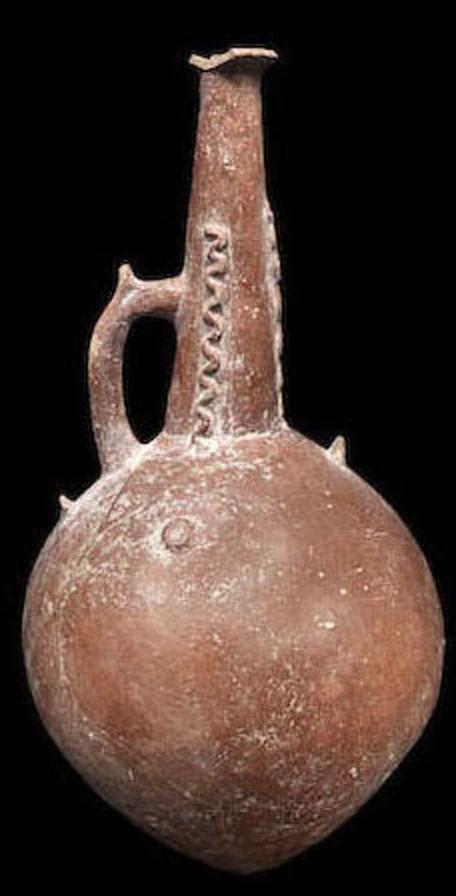