Red Incised Polished Ware. Most tulip bowls (named from their shape) are from Early Cypriot I and the area of Vounous in the North of Cyprus. The clay was covered with red slip which was then burnished to produce a high polish. The decorative incised lines were probably originally filled with (white) lime. This one has a bird’s head protruding on either side of the rim, facing outwards. (It should be mentioned, however, that it has been suggested they might simply have been ornamental lugs and their clear bird head form might have appeared during restoration.)  Birds were probably considered to be spirit vehicles, especially later in the Early Bronze Age when they become the dominant animals on cult vessels, and perhaps even 1500 years later in the archaic period when birds dominate the imagery on the splendid "free field" jugs.

The bowl's narrow pointed base is pierced horizontally through the tip, perhaps to hang it up by a string when not in use. The hanging of pottery from pegs in the wall seems to have continued well into the Early Iron Age. Probably when used it would have sat on a ring made of straw or wood. This design seems to have died out well before the end of the Early Cypriot period.

Very elaborate cult vessels from this period have been found which had modelled birds, bulls, bucrania (bull's heads) stags and mini depictions of bowls and jugs, sitting on the rim. (See the Middle Cypriot period for my own late example from this tradition. But such cult vessels, along with others showing scenes with human figures, were impractical and probably made especially for ceremonies tombs. As such they were usually less well fired since they wouldn't have to withstand wear. Of course, other than fragments, most pots have been found in tombs in any case.

Repaired from fragments with some consolidation and repainting over the repair lines. The bird head lugs have been repaired. The interior repainted over repairs and worn patches. Perhaps over-restored for my taste, though you can see repairs and restorations if you look.  The last owner broke 2 large pieces from the rim and glued them back extremely crudely, which I have had mended. 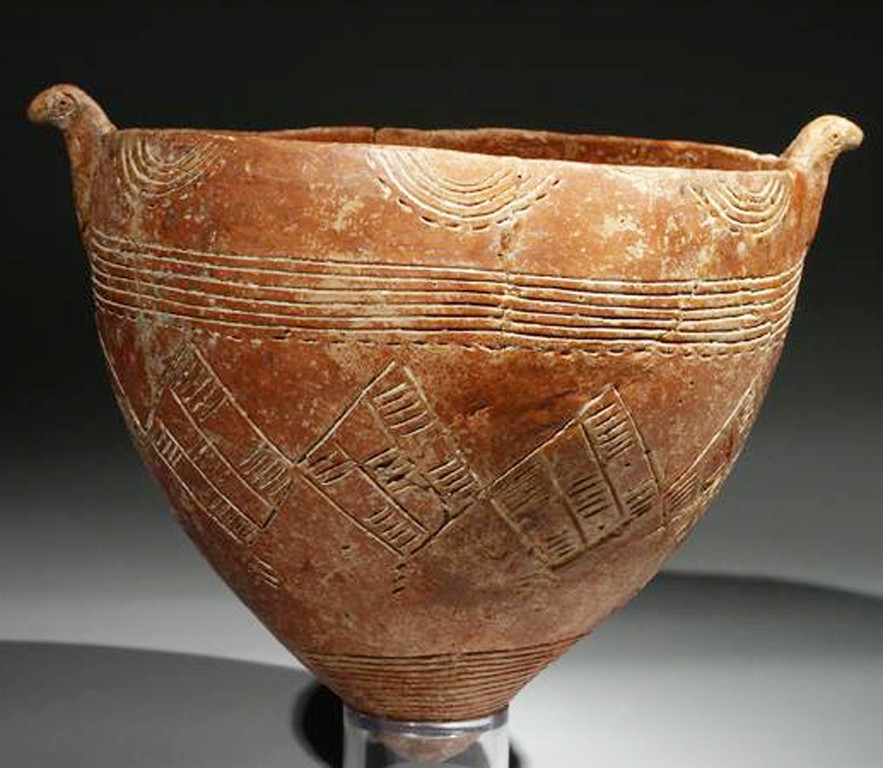