Philia Red Incised  Polished Ware.  The majority of the red slip has been lost. The jug with cut-away spout is an iconic shape from the small repertoir of Philia period pottery as catalogued by Webb & Frankel.  There is an almost identical piece in a photo from the Department of Antiquities, Nicosia: http://eca.state.gov/files/bureau/icpp/cypruspc/00000004.htm  except that my one has incised abstract decoration to the upper body which, as is usual is in this period, is made up of discontinuous straight lines.  However it also has a handle made from 3 strips twisted together, a sort of compromise between a twist and a plait.  Twisted handles are found occasionally from the Early Cypriot onwards and plaited ones in the Iron Age. But I have been told this might be the only known, relatively complete example with a plaited handle from the Philia period. One fragmentary example is known from tomb 9 at Nicosia Ayia Paraskevi excavated by Stewart in 1955. Mine has an awkward experimental look, as though the potter didn't quite know what she (or he) was doing. Perhaps it was an attempt to copy hair braiding. This makes me wonder if this piece is transitional between Philia and Early Cypriot (The end of the Philia culture used to be put at 2300BC but is now edging towards 2200BC, so perhaps this jug comes from between these dates.  A pair of relief eyes on either side of the spout have been applied to give the jug the appearance of a bird with an out-stretched neck, as in the example from the Department of Antiquities. The zoomorphic appearance is typical of Ancient Cypriot pottery from the Philia right on into the Early Iron Age (see my Iron Age jugs which both have painted eyes near the rim). The jug becomes a personage. The spout is cut away in a characteristic way which was continued into Early and Middle Cypriot jugs (see my Middle Bronze Age jug) though not in the south.

This piece is likely to have come from the North (from a site such as Vasilia) or from the Ovgos Valley, both areas of the island which have been under Turkish occupation since 1974. Although tomb looting goes on across the island, if it was acquired after 1974 it is most likely to have been looted and sold from the occupied area.  I am attempting to find out from his estate when the famous artist who collected it is likely to have bought it.

The jug is flat-bottomed which is normally the case with Philia pottery, while Early and Middle Cypriot wares were almost always round bottomed, except in the South where the flat bottom can be found nearly to the end of the EC period. Only with Base ring Ware and Handmade Bichrome Ware in the Late Bronze Age did pots reappear which could sit on a flat surface, joined later in that period by imported Mycenaean wares and Cypriot wares derived from them.   The jug was sold to me as Early or Mid Bronze Age so I was quite excited when I realised what it must be.  I had been hoping for a while that I might find a piece from the first culture of Anatolian settlers who brought bronze-making technology to Cyprus - and here it is.

Repaired from numerous pieces, surface of slip worn, some losses and (red) patches of restoration.

(Ex. collection: Walter Womacka, Germany (1925-2010). Womacka was a Socialist Realist painter and head of the School of Art and Design Berlin-Weissensee from 1968 until 1988.) 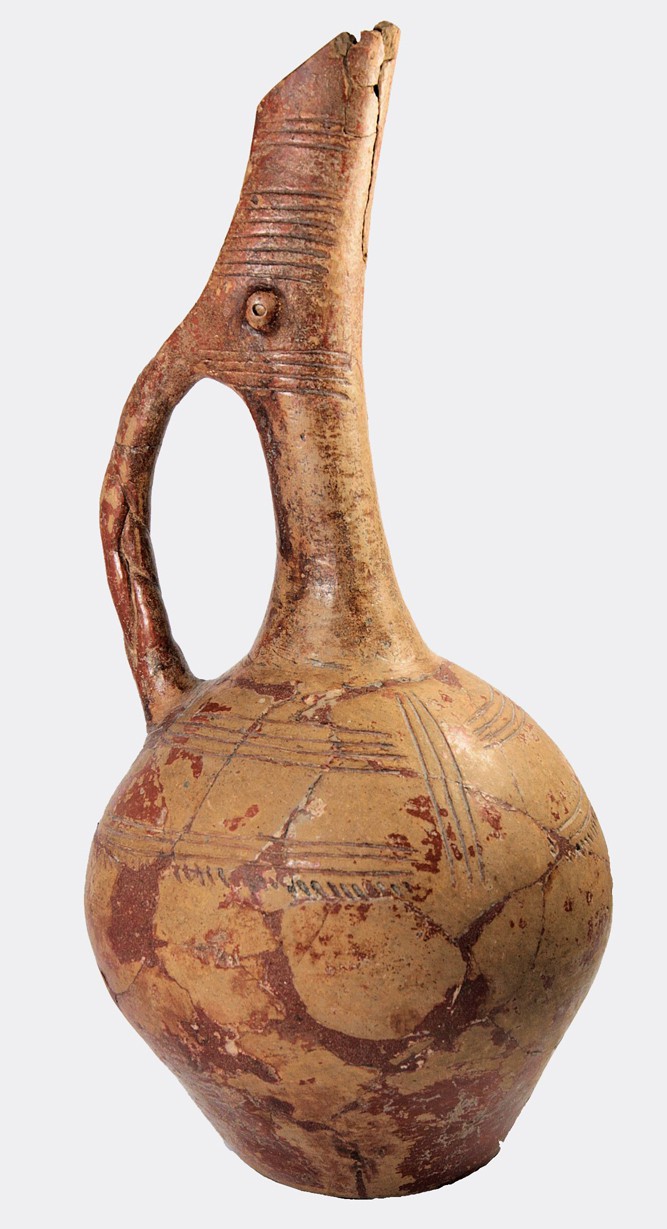