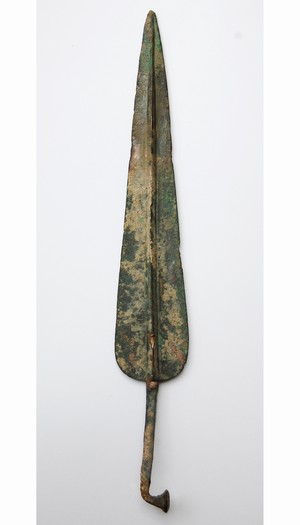 Fine 15” (38cm) spear head, sold to me as 1200 BC, the time of the Trojan war, but now suggested on stylistic grounds to be probably from early in the Cypriot Early Bronze Age. However if this is the case it should be made of arsenic bronze rather than tin bronze. This is untested. The offset knob or button on the tang occurs on Philia culture examples (the first phase of the Bronze Age dated before the Early Cypriot period, so around 2450 to 2200 BC) but the rounded shoulder is more typical of EC I-II date (2200 to around 2000 or so)  Very similarly shaped spears but with hooked tip to the rat-tailed tang were common in Cyprus and the near east and they existed right through the Bronze age, though in the Late Bronze Age many spears had sockets. The socket is functionally superior but more complex to make.

This spear is so fine it would have been a prestige object which only important people might have owned (and been buried with). The spear tip would have been cast in a two part mould and then hammered. Forging bronze is tricky – mistakes can’t be rectified as with iron. It would have been fixed into the handle (with knob-end visible) by boring a hole and splitting the end; afterwards binding the split end with laching cord*. 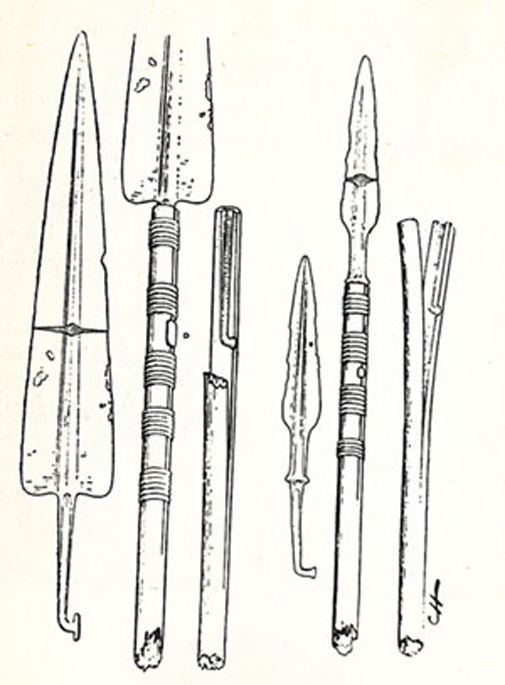 The angled tang prevents it being pulled out. A 6 ft or at most 8ft wooden shaft is likely. There are longer spears, held with both hands, depicted later in the bronze age (eg Acrotiri fresco 1600 BC). Throwing spears were also later and had smaller heads. Spears were the most common weapon of the time. Although there is no direct evidence, combat reconstruction suggests it may, as later, have been used largely one-handed in battle with a shield in the other hand, but impromptu use might be different. There are no defences or other indications that the Early Bronze Age was a period of conflict on the island, but spearheads are found in tombs – though not as often as later in the Bronze Age. They may have been status symbols or simply standard weapons carried by males who had to be prepared for the dangers of everyday life. Spears might also have been used for hunting and ceremonial purposes, though in more recent times hunting spears usually had smaller heads than this. Often in northern Europe such bronze objects were deposited as a propitiatory offering in water in which case they were usually first bent or broken to remove them from this world. Similarly weapons placed in Cypriot tombs were often deliberately bent. Cyprus was the chief Mediterranean source of copper and Homer said that his heroes wore Cypriot bronze armour. Indeed, most western languages derive their word for copper from Kupros (Kypros), the Greek name for the island**. Copper made Cyprus rich but 200,000 tons of ancient copper slag suggest 200 million pine trees cut for fuel, which deforested the island. The industry largely died around 300 AD due to lack of fuel.

** via Latin: early Latin “aes cyprium” which means “Cypriot ore”; later Latin “Cuprum”. The name Kupros may itself derive from the Sumerian for copper. The native Bronze Age name for Cyprus was Alashiya but the Greek language and customs gradually supplanted Cypriot, following extensive Greek immigration in the 12th and 11th century BC. 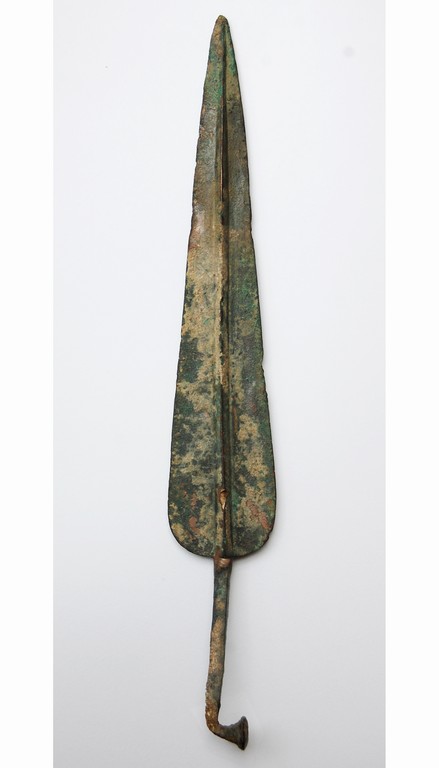