Many spears were still made with tang rather than socket, right up to the Iron Age (usually a hooked rat-tail tang, like my Early Bronze Age  spear but without the unusual knob on the tang-tip of that one). The socketed spear is clearly superior since the shaft of a tanged spear can split (or a straight tang can pull out), however it is much harder to cast and hammer such a complicated shape. In Byblos (near Cyprus on the coast of modern Lebanon) many socketed spearheads have been found dating from the beginning of the Middle Bronze Age, but they seem to have been less common in Cyprus.  Andrea Salimbeti, an authority on ancient weapons, dates it anywhere from 1500-1100 BC.  At around 40cm long (originally) it is at the upper end of size of this type, which can be anywhere from 40-15cm.

There is a piece of the original wooden shaft inside the socket which is very unusual for a weapon this early.  When it was put in a tomb it was still clearly attached to its shaft, which may have been broken when it was deposited as a grave gift. The tip of the blade would originally have been more pointed and sharp: it might have been damaged and reground. Around the socket where it meets the blade, there are several decorative, regularly spaced incised lines with repeated diagonals filling the spaces between them.  The spearhead was cast and then hammered to harden it and wrap the socket around the handle, leaving a seam down its length. Sometimes sockets were cast flat and hammered to bend them around, and others (possibly like this one) were cast with a V shaped gap in a tapering cast socket, which was hammered closed around the shaft. Skill would have been required for this since bronze, unlike iron, easily cracks and cannot then be mended. The lower end is raggedly broken off and at one point of the break is what appears to be a rivet-hole. There could have been another where the socket is broken horizontally in the middle.

The size and quality of this spearhead might indicate that it comes from the Late Cypriot (ie Late Bronze Age) II period, a high point in Cypriot (and world) civilisation, with grid-plan walled towns and widespread export of its copper and pottery and other goods around the Eastern Mediterranean. However, the next period, Early Cypriot III (1200-1050 BC), is perhaps more likely.  This was a turbulent period. 1200 BC is the date normally given for the Trojan war and Homer tells us his heroes wore Cypriot armour. However, soon after this high point of Bronze Age culture, raids by “Sea peoples” (possibly from Northern Greece) began which were to end with the collapse of the Mycenaean, Hittite and Ugarit civilisations and destructive assaults on Egypt and Cyprus which caused the destruction or abandonment of most of the major Cypriot coastal cities.  The abandoned ones may simply reflect the collapse of the trade which sustained them. Cyprus had traded heavily with these peoples, exporting copper and pottery, and importing Mycenaean luxuries and pottery which is found in many high status Cypriot tombs (see below). In Cyprus, however, some cities were rebuilt and others founded, and culture was revitalised by the arrival of waves of Greek Mycenaean refugees and settlers. They brought their culture and style with them and this eventually fused with the local traditions, resulting in a Greek dominated culture by the middle of the Iron Age, with the island initially divided into 7 kingdoms (later 10).

Already a few iron weapons were also being made in Cyprus in the Late Bronze III period (1200-1050 BC) when this spear was most likely made.  Iron ore is more widely available and does not need imported tin to make it, but needs a hotter furnace. Initially, though, it is thought the Cypriots used iron-rich slag from copper extraction, which required less fuel.  However until the addition of carbon to make steel was understood, iron was often no harder than bronze. Around 1050 BC, despite being the main producer of copper in the Mediterranean, Cyprus became the first iron based economy in that area, partly because of a shortage of tin.  However copper mining continued and Bronze objects continued to be made.

Blade in good condition with fragments of the socket missing and tip probably damaged and re-ground in antiquity.

(Ex the collection of Hans Henningsen (died 2002) in Denmark. Collected with pottery in 1964 during a visit to Cyprus.) 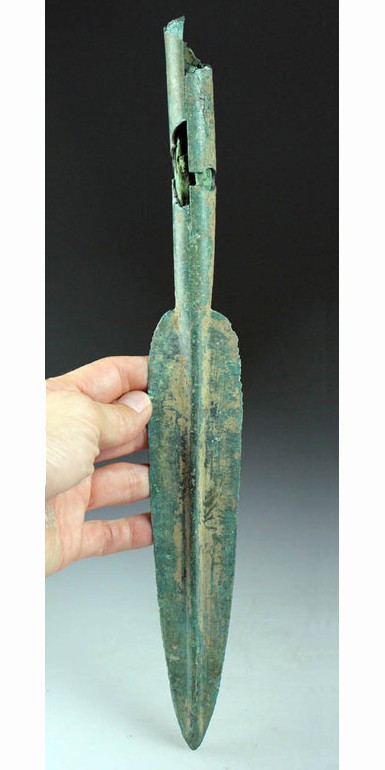