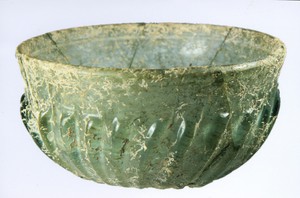 Glass was very common in the Roman empire. It had been discovered in ancient Sumeria around 3500 BC.

Rome had achieved independence from the Etruscans around 500BC and formed a republic. In the !st century BC the Republic ended and Sulla ruled. Julius Caesar ended the Triumverate which followed. From 31BC the first Emperor Augustus ruled What had become a large empire which included Greece (from the 2nd century BC) Hispania (Spain) and Gaul (France). . Cicero and Virgil thought and wrote.   A succession of emperors followed in the 1st century AD, including Nero, and the first Christians arrived and after a while started to be persecuted. Claudius invaded Britain in 43AD and England and Wales became a Roman colony.

The form of this bowl, like much Roman culture and design, was derived from the Etruscans and Greeks. Like many other classical shapes it was copied in the 18th century (my mother has an almost identical Georgian silver sugar bowl. Much mended