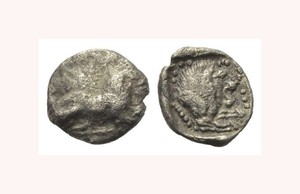 The earliest groups of silver Siglos coins of the kings of Amathous with a lion as the main iconographic type, also found on later coins, are dated between 460 and 430 BC and can be assigned to three kings.  The first group of coins bears no legends, the second attests the name of a king Rhoïkos in Cypriote-syllabic script, who issued sigloi with a recumbent lion on the obverse, and the forepart of a lion on the reverse, as well as smaller denominations 1/6, 1/12 (as here) & 1/24.  The third group attests the name of a king known to us only by the single Cypriote-Syllabic sign 𐠗 (mo), which appears on sigloi with a recumbent lion, with an eagle flying above, on the obverse, and a forepart of a lion on the reverse.

After this Amathous changed its monetary weight standard to the “Chian” or “Rhodian” weights of didrachms of 6.7gm, and this has been connected with the extension of the power of Evagoras I of Salamis in 391-386 to other Cypriot kingdoms, which may have involved the conquest of Amathous.