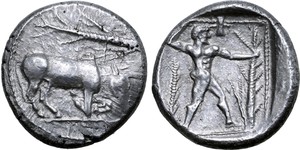 This is the second known example of an extremely rare issue known otherwise only from a single stater acquired by the British Museum c. 1938-1948 and a corresponding trite (see below) that was already in the possession of the British Museum at that time. Robinson revised the description previously made of the trite by J. P. Six (NC 1897, pp. 206-7) and repeated by Hill (BMC Cyprus) that described the figure as Herakles, who on the stater can evidently be seen to carry not a club but a labrys, and no trace of a lion-skin can be discerned; moreover the bow he was supposed to hold in his left hand is actually a branch of one of the trees. Robinson observes that "his double-axe points to a pre-Hellenic origin, and the fir-trees suggest high altitudes. He is perhaps a Zeus, like the Carian Labraundos, developed out of an Anatolian sky god, and blasting the fir-trees on the mountain-top with his lightnings. Alternatively he may be a native hero, and the trees may represent a grove. In any case the curious posture of the bull on the new stater makes it tempting to interpret obverse and reverse types in close conjunction as illustrating some local myth."

Possibly referring to the epic of Gilgamesh? (combing the cutting down of the Cedar Forest and the killing of the Bull of Heaven). Gilgamesh is thought to have influenced Homer, two centuries earlier. The kneeling position of the bull usually signifies death or imminent sacrifice, but in the Bibliothèque Nationale version the bull is not kneeling.

Robinson remarked also that the bull is left as the only remaining link to the group of coins attributed to Golgoi, and he considered it "a very feeble link indeed". (The coins he referred to are those with a bull and a lion and Cypro-syllabic “ko”, now ascribed to Kourion.). Indeed, the attribution to Golgoi of any coinage at all has been more recently challenged; it does not appear in contemporary sources, and Collobier (1991) concludes there is no evidence for Golgoi as an independent state in this period, citing Hill (1949). The archaeological evidence does point to the existence of a fortified town in C5-C4, but this does not seem reason enough to consider a Golgoi even a weak polis; however Golgoi does seem to have been a relatively important cult centre "en dehors des capitales" (see Inventory of Archaic and Classical Poleis p. 1225).

Michel Amandry (Un statère inédit de Golgoi (?) au Cabinet des Médailles, 1991) published a coin in the possession of the Bibliothèque Nationale de France that must be considered to be a product of the same mint, but with bull not kneeling and branch above more like a laurel branch with leaves(?). He ignores the arguments of Robinson in favour of the original attribution by Six to Golgoi, citing the bas-relief found at Golgoi and presently housed at the Metropolitan Museum in New York, which depicts Eurytion, guardian of the cattle of Geryon trying to hide the animals from Herakles with a fir tree.   In 1999 Jonathan Kagan classified the Bibliothèque Nationale version of the coin coin as probably from Golgoi in “The Archaic and Early Classical coinage of Kourion” A second copy of this variant was sold in 26/03/2020 by Roma Neumismatics:  11.10gm, 23mm, 7h.   It should be said that the British Museum trite seems to belong with the same type, both in the design of the standing bull with leafy branch, and in that the bull is on the reverse.

It remains only to be said therefore that the present type is the excessively rare product of an uncertain mint that will require further find spot evidence to come to light before an attribution to any specific location or authority may be conclusively confirmed. Some have even doubted it is Cypriot, and if the imagery is from the epic of Gilgamesh this is even more likely.

(Ex collection of an antiquarian (known personally by Richard Beale, Managing Director of Roma Numismatics), Bavaria c. 1960s-1990s, outside of Cyprus prior to December 1992.)