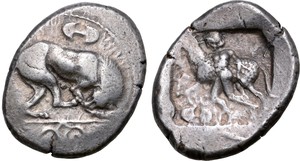 This is the first coin issued by Marion, along with thirds.

Lion standing right, licking its right foreleg; Boiotian shield above, …𐠨𐠨𐠔𐠃𐠩 read right to left = sa-sa-ma-o-se [to-ka-sa-to-ro] (Sasmas son of Doxandros) almost illegible in Cypriot script across upper field. Floral pattern in exergue. On reverse: Phrixos running left, clinging to the back of a ram advancing left; 𐠔𐠤𐠁𐠄𐠨 [ma-ri-eu-se] (of Marion) illegible in Cypriot script, with Boiotian shield to left and below, all within incuse square.

Having the king’s name and patronym on this coin type is unique in Cyprus.

Phrixus and Helle were hated by their stepmother, Ino. She hatched a devious plot to get rid of the twins, roasting all of Boeotia's crop seeds so they would not grow. The local farmers, frightened of famine, asked a nearby oracle for assistance. Ino bribed the men sent to the oracle to lie and tell the others that the oracle required the sacrifice of Phrixus and Helle. Before they were killed, though, Phrixus and Helle were rescued by a flying, or swimming,[1] ram with golden wool sent by Nephele, their natural mother; their starting point is variously recorded as Halos in Thessaly and Orchomenus in Boeotia. During their flight Helle swooned, fell off the ram and drowned in the strait between Europe and Asia, which was named after her the Hellespont, meaning the sea of Helle (now Dardanelles); Phrixus survived all the way to Colchis, where King Aeëtes, the son of the sun god Helios, took him in and treated him kindly, giving Phrixus his daughter, Chalciope, in marriage. In gratitude, Phrixus sacrificed the ram to Poseidon and gave the king the Golden Fleece of the ram, which Aeëtes hung in a tree in the holy grove of Ares in his kingdom, guarded by a dragon that never slept. Phrixus and Chalciope had four sons, who later joined forces with the Argonauts. The oldest was Argos/ Argus, Phrontis, Melas, and Cytisorus.

(Ex collection of an antiquarian (known personally by Richard Beale, Managing Director of Roma Numismatics), Bavaria c. 1960s-1990s, outside of Cyprus prior to December 1992.) 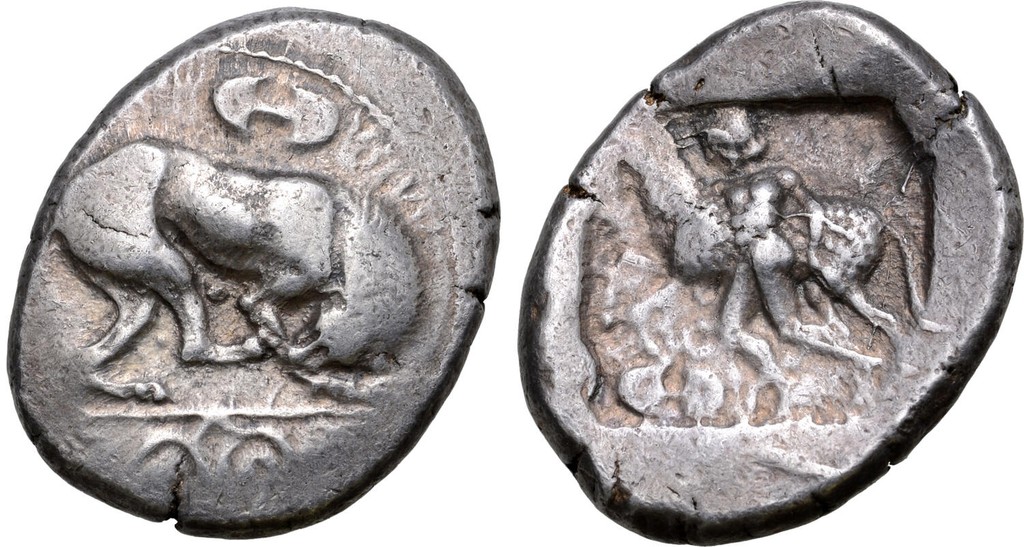