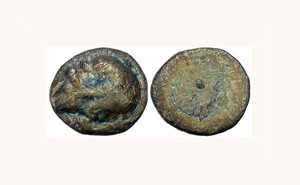 Tiny <1cm silver 1/12th stater (1/24th Siglos) coin, the smallest of those issued by Evelthon (560-520 BC), first historically documented Wanax (King) of Salamis. Evelthon was the first king to strike coins in Cyprus (538 BC?), around the time of the Persian conquest, and they probably continued to be struck in his name after his death. He only issued silver coins in a style imitating Greek coinage. His currency showed on the obverse a recumbent ram, or (as here) a ram’s head, facing left, with Cypro-syllabic script “elu” (divinity). However the reverse of this coin is blank (like several of his earliest coins) instead of showing his usual Ankh symbol. Salamis was at that time one of the 9 kingdoms of Cyprus, out of 10 which had formed around the start of the Iron Age. However it seems, under Evelthon, to have been the most dominant, and continued to be under the Persians. He conducted foreign policy and dedicated offerings at Delphi and was written about by Herodotus. Salamis was founded in the 11th century BC to replace the nearby Enkomi, which had been the largest Late Bronze Age city. It had been destroyed by earlier earthquakes and sea raiders and rebuilt with defensive walls, but was finally destroyed in 1050 by earthquakes and not rebuilt since it had become isolated from the sea.

After Evelthon the other Cypriot kingdoms struck their own currencies using the same Stater weight. Cypriot script (which was derived from Minoan Linear A) was used on all early Cypriot coins, later replaced by Greek.  The exception was the Phoenician kings of Kition who used Phoenician: itself the ancestor of the Greek alphabet.

Coins existed in Lydia, Greece, India, and China from c. 700BC. Herodotus wrote that the Lydians had struck the first gold and silver coins (the former actually Electrum, a naturally occurring mixture of both). The silver Stater was worth 1/10th the electrum Stater and was based on the Babylonian Shekel weight: 1/60th of a Mina. (Babylonians often used multiples of 12 or 60: we still use their hours, minutes seconds and angles in degrees).

The Persians under Cyrus the Great had defeated Lidia’s king Kroisos (as in our “rich as Croesus”) in 546 BC and absorbed Lydia into their empire. In 530 Cyrus died and was succeeded by Cambyses. In 525 and 526 his armies conquered Egypt and Cyprus, which had been under Egyptian control for 44 years, but he left the local Cypriot rulers in place. Their rule was light at first but later Cyprus was fully absorbed into the empire. UnderDarius I, who succeeded Cambyses in 522 BC, it contributed soldiers to the Persian re-conquest of Babylon and war in Egypt. At its height the Persian empire under Darius ruled c.50 million people: estimated as about 44% of the world’s population. Somewhere between 520-500BC he struck the first specifically Persian coins: the silver Siglos and gold Daric (20 Sigloi = 1 Daric: this ratio and 1/12 siglos division was reflected in British pounds / shillings & pence). Persian currency imitated Lydian currency except at half the Lydian weight and value.. The Persian Siglos weighed about 5.4gm. The weight of a coin reflected its value so my 1/12 stater coin at 0.832gm should make a whole stater weigh 10gm, which is about the c.11gm Lydian weight. (So I was wrongly sold this as a 1/12 siglos). The Cypriot stater is sometimes called a double siglos. Minor coins were 1/3, 1/6, 1/12 and 1/24 of a stater. (Greek Staters/Drachmae were 8.6/4.3gm) The Lydian coins had a blank reverse except for punch-marks, so this is in line with the blank reverse of my coin and suggests it was the earliest version.