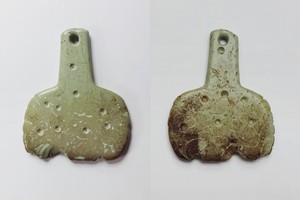 Picrolite flat stone pendant with ovoid or rounded-oblong body and extended neck, pierced near the end for suspension. Both sides are marked by shallow drill holes, 9 on one side, 8 on the other. A 10th drill hole on the right extreme edge of the paler side, apparent on Morris’s photo, seems slightly damaged since and now appears more as a tiny chip. 2 larger chips from lower edge might have included drill holes.

This piece belonged to Desmond Morris who said in his book that he believed it was Chalcolithic and an ancestor of similarly shaped but much larger pottery “Comb Figures” from the EC II -MC I, which he thought might be ancestors of the Anthropomorphic Plank Figures. Since then a number of similar shaped pendants have been found in the South, principally in the Kouris region, from Middle Bronze Age contexts or one dated EC III-MCI (Lubsen-Admiraal), 4 made of picrolite and two of serpentine. It now seems reasonable to see Comb Figures and these similarly shaped pendants as contemporary and referring to the same thing, though comb figures have only been found in mortuary contexts, while comb pendants have been found in both settlements and tombs. However, Comb figures have parallel vertical grooves on their lower 2/5ths and the pendants have analogous corrugations along their lower edges, which this pendant does not have. However this pendant is clearly from the same corpus. Conversely this pendant uniquely has shallow drill holes on both sides. The closest equivalent found on other pendants from the EC III-MC I (including one comb-shaped pendant) is an engraved dot with a ring around it. However shallow drill holes are a known decorative feature from the Early Cypriot period, so it would be reasonable to consider that period, contemporary with earlier comb figures, as a probable dating.

The meaning of Comb figures (and therefore now comb pendants) has always been controversial.. Toiletry combs or ritual brushes or musical instruments have all been suggested, but the most likely are either carding combs, used in preparing wool for spinning, or beaters used in weaving. These references to important elements of textile production would probably have been symbolic, and they joined spindle whorls and model spindles in tombs. Morris’s suggestion that Comb figures (and thus comb pendants) were anthropomorphic and ancestors of Plank figures is not now widely held. The shape is very widely referenced on the backs of Plank figures (see Annex 99 & 160) and on pottery (see Annex 61). In the former case the suggestion that these represent actual pottery Comb Figures, used for example as counterweights to necklaces, seemed unlikely due to their weight, but pendants might have been worn in this position. 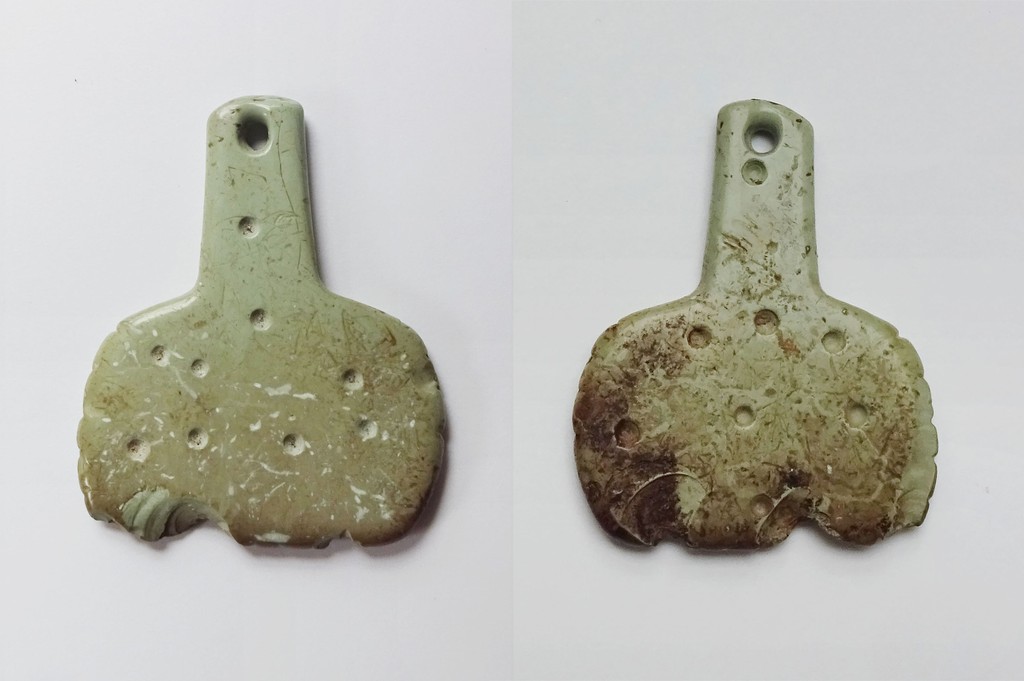