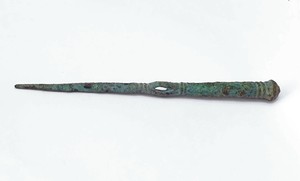 Probably from North Cyprus in the Middle Bonze Age (or just possibly Early Cypriot III). They known from the Philia period onwards, and are believed to have been used to secure clothing. However their unnecessarily large size suggests a large element of prestige display. Such pins are thought to be represented on many plank figures. Other than daggers/ knives toggle pins were the most commonly found among the 18000 copper based objects found in 140 Lapithos tombs. They were also the object type containing the highest proportion of tin. Many of the other objects were predominantly alloyed with arsenic or a combination of tin and arsenic.

(Found by the Dr Allen Heflin in Cyprus 1962 (His notation written on pin). The archaeologist Dr Heflin donated items to museums in the Universities of Missouri, Columbia, and Kansas. Later sold by Harlan J Burk Ltd, Chicago USA to HD Enterprises, Aurora CO, USA. Subsequently bought from them by K Kiriacou.)