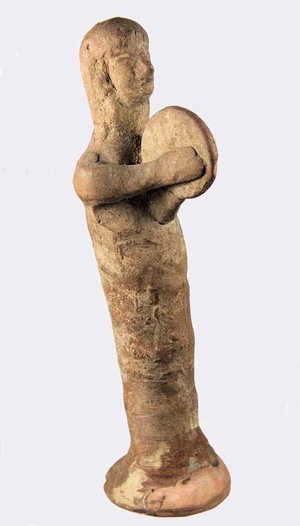 Hollow handmade pottery figure with face made with a mould of a Musician holding tympanum (hand drum or tambourine). Figures playing the tympanum in ancient religious rites were normally depicted as female, as this one probably is. In Cyprus there are votive depictions of several such figures surrounding a priest, so these figures seem to relate to religious ritual, possibly priestesses. This tradition continued into ancient Greece and Rome.

These mass produced, usually votive figures appear in the 11th century, and earlier designs, paricularly some with raised arms, may derive from Minoan (Cretan) originals. They proliferated in the Archaic period and have been found in large numbers in shrines (and also tombs). Though a few large temples had existed previously, numerous country shrines were a new feature of the period. The figurines usually depict either worshipers, musicians, offering bearers or warriors (sometimes mounted on horses or chariots). The high hats of some are thought to indicate priests. They were almost all originally painted in red and black (like Bichrome Ware pots). There are traces of red paint on the hair and shoulders. I am unsure if the eyes are only modelled or if I am seeing paint traces (normally the eyes are painted black). They were probably not servants for the after-world, as in Egyptian tombs but rather substitutes for the worshiper or mourner. They are most likely to represent human living figures, offered in tombs or shrines to carry out some musical rite for the deceased on behalf of the donor or as a homage to the gods, or in shrines given in the hope of fertility (both human, livestock) good harvests and healing etc. . Known as snowman figures from their shape, they are generally crudely made offerings, affordable to a wide range of people. The head is usually made in a mould and fixed onto the body which is sometimes hollow and slightly conical, or cylindrical as here with only the base splaying out.  This latter is a type of tambourine figure derives from Lapithos. However Cypriot craftsmen were capable of fine human sculptures – as can be seen from impressive carved figures of the time. There were also pottery animal figures, (bulls, deer, goats, sheep horses, donkeys and birds).

Cyprus was invaded by the Egyptian Pharaoh Amasis II in 570BC. .A brief period of Egyptian domination left its influence mainly in the arts, especially sculpture, where the rigidity and the dress of the Egyptian style can be observed. Cypriot artists later discarded this Egyptian style in favour of Greek prototypes. However Cyprus was largely left to govern itself. In 526 BC The Persian’s invaded. At first their rule was light and local kings still had some power but later Cyprus was fully absorbed into the Empire, though the culture was still largely Greek. In 499 Cyprus took part in the Ionian revolt against the Persians but this failed.