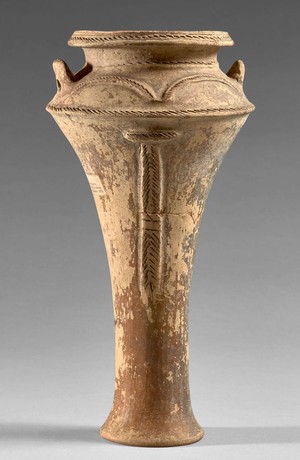 A unique, Base Ring I ware vessel, possibly intended for ritual use. A tall, conical, concave body rises from a narrow ring base via a highly carinated transition with applied rope decoration, narrowing briefly to a short ring neck and everted lip, both with rope decoration. Two small vertical handles decorate the shoulders, along with curved rope decorations on each side suggesting bull-horns. Below them pedestal-like applied straps with incised decoration further suggests bull protomes or human faces.

The base is consistent with Base Ring Ware and the rope decoration is classic Base Ring I. The top half suggests a carinated and stretched version of Minoan/ Mycenaean pithoi. and might be derivation from bronze vessels. Carinated shapes are however, a feature of some Plain White Wheelmade Ware. In contrast to the very hard finish of most Base Ring I, the majority of the grey/brown slip has worn off, suggesting a lower firing temperature, which might relate it to experimentation with new techniques. Inner lip a richer brown-red / dark grey. Firing crack on inside of neck.

Possibly related to a type of funnel-shaped Base Ring vessels with protruding bull protome, primarily used in worship, and derive from Minoan originals.