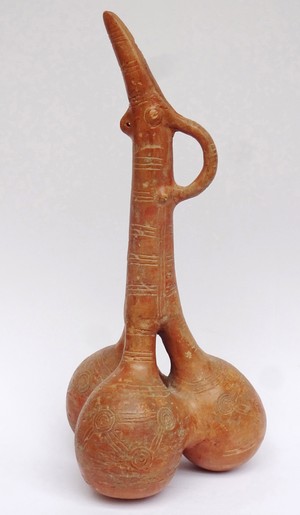 Early Bronze Age III- Middle Bronze Age I incised Red Polished Ware jug with 3 ovoid bodies, internally interconnected, and pale orange-brown slip. The lower necks of 3 jugs combine into one tall neck. A small half-circle handle immediately below the cut-away spout with lugs by each end, on both sides, and pierced lug opposite. The 2 upper lugs consist of a flattened pellet surmounted by a smaller flattened pellet and dot in the middle: in appearance reminiscent of eyes on Late Cypriot figurines. Groups of 3 incised lines ring all the necks continuing up the spout and interrupted by 3 groups of 4 vertical lines (front and sides). Each of the 3 jug bodies has a ring of grouped lines top and bottom, and between these, 2 rows of concentric circles (3 above and 2 below) and groups of parallel lines joining these, creating 3 triangles. Any white lime there may have been in the incisions has disappeared.

Such composite vessels come almost entirely from the North which was the focus of formal innovation, and good parallels are found at Bellapais-Vounous and Lapithos during EC III, in particular one from Tomb 15, No.50 which is so similar it must be from the same workshop. (Pl XXXI "The Excavations at Vounous-Bellapais in Cyprus 19312-2" P Daikos, Archaeologia 88 1938)

This elaboration of multiplied forms for their own sake was clearly intended to impress, rather than to be functional, and such pieces may have been created especially as funeral gifts to confirm and enhance the prestige of the giver and the kin group. They suggest that the North had a more hierarchical society than the rest of the island, which retained some of the egalitarian features present in the Chalcolithic. In other examples, such multiple vessels were topped by a fourth, superimposed body, or the 3 jugs can be one above another.

Complete but with some repairs of handle and spout and (probably) the linked bodies.

(Ex collection of Desmond Morris, bought for him after 1985 as gift, from a country auction (catalogued as Mediaeval).) 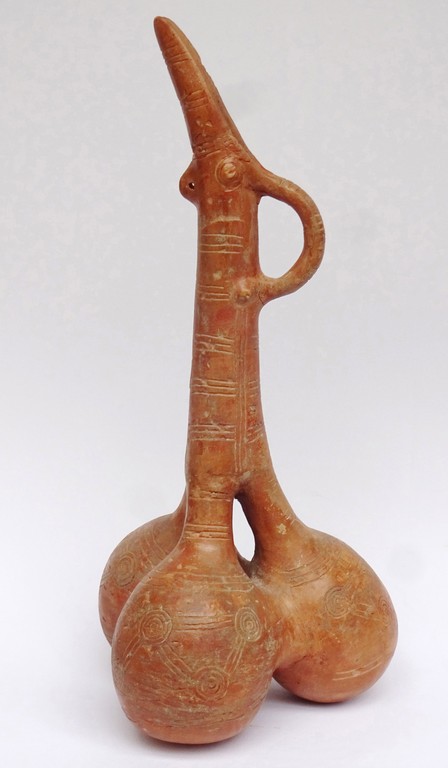