Limestone statue of young child holding a (?)dove excavated, according to his own account, by Luigi Palma di Cesnola in 1874 in a ravine a few hundred metres South East of the Sanctuary of Apollo Hylates with 24 others of the same type, one with an inscribed dedication to Apollo in the Cypriot syllabary. Possible this location was some sort of bothros (pit for depositing offerings) for votive pieces when the Romans rebuilt the earlier temple. This site was identified by McFadden in 1935 as Ayia Anna.

About 300 of these “Temple Boy statues have been found in sanctuaries in Cyprus. Most are believed to be boys of about 2 years old, though one or two figures of girls have been found. They are believed to represent children consecrated as servants to a divinity (in this case Apollo). Possibly they mark an important moment in a child’s development, perhaps when passing from the exclusive care of the mother. They used to be explained in terms of a Cypriot custom of child priests. This might be compared with the Jewish presentation in the temple of first-born males (Redemption of the First Born) 30 days (or later) after birth. This derived from the passover and originally related to their dedication in childhood as priests.

As is usual, his pleated chiton is drawn up to reveal the child’s genitals, but here they are unusually hard to see, possibly resting behind and against his heel . He carries a belt across his chest from which hang protective rings and amulets. The Phoenician style signet rings, on attached loops, were sometimes inscribed with magical words or images. Horizontal objects were probably cases to contain magic formulas. Cylindrical amulets possibly refer to the shape of Heracles’ club, since he was believed, as an infant, to have strangled two serpents in his cradle, making him a suitable protector.

One example of these figures had cloak, amulets and other details picked out in bright paint (mostly red), and they were probably all originally painted, though the cleaning of ancient statues in the 19th century normally removed such traces. In his left hand he holds an object, possibly a bird or a ball. Birds were common offerings (the dove was often considered a symbol of Aphrodite but also Asklepios. The hawk was sacred to Apollo but this is too small to be a hawk). He is seated on a mound, right arm bent, knees strongly bent, right leg splayed, torso turned to his left. His hair is short.

The Cypriot Temple Boy stone statues range from the last quarter of the 6th Century till the late Hellenic. They are usually found in sanctuaries of Godesses associated with child rearing, but Apollo also had Kurotrophic associations. The pose originates in small statuettes found in Egyptian tombs, and originally may have depicted divine children. (The Egyptian hierogliph for a youth is a figure in this pose). They spread via the Phoenicians to Rhodes, and Cyprus in about 520 BC and then Greece where they are common in sanctuaries and tombs as terracottas (often mould-made) but also, sometimes as carved statues in Attica. The statuettes are also found in the Near East, Boetia, Corinth, Sicily, Etruria and South Italy.

Most of right forearm lost, and losses to left hand and (?)dove, right knee and left toes. A chip to the front and right-rear of mound. Repaired break to neck. Some surface erosion, especially of back. Has there been any 19thC re-carving? 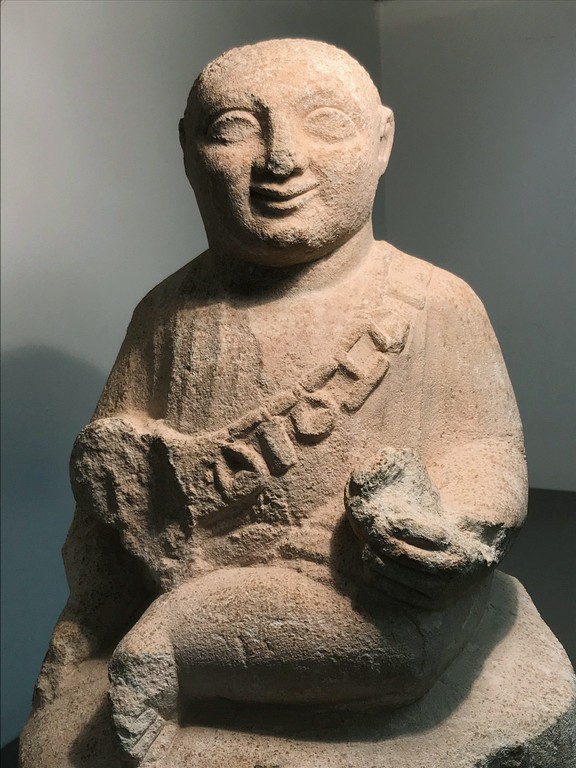