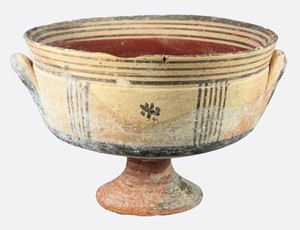 This is known as Bichrome ware. It was wheel made, covered with white slip and then painted with red and black lines. Was this influenced by Greek Archaic period Geometric ware, which marked the resurgence of Greek civilisation after the collapse of Mycenaean Greece, or, more likely, was it the reverse, since Cypriot culture never collapsed in the same way? Cyprus consisted of 7 (later 10) city kingdoms, formed during the early Geometric period on the lines of the Mycenaean city states.  The Mycenaean Greek language gradually achieved cultural dominance over the native Eteocypriot during this period, having been brought over by migrants from the Greek lands, which had suffered the collapse of Mycenaean culture, from 1200BC, where literacy had been lost.  In this reverse cultural dominance, the oldest iron objects found in Greece came from Cyprus.  Earlier in the Geometric period Phoenician settlers and traders arrived and (possibly in the 8th century BC) formed a kingdom around Kition, helping to re-establish Cypriot trade routes, and bringing their religion, writing and language which existed in parallel with the ancient Cypriot language and  Mycenaean Greek. Aphrodite (identified with Phoenician Astarte) was believed to have been born in Cyprus.

Homer lived around 750BC and Homeric myths spread to Cyprus during the following Archaic I period, during which Phoenicia and Cyprus were vassal states of Assyria (709-663BC). Some of the later Archaic period pottery shapes and their decoration (particularly black on red ware) are also found in contemporary Phoenicia so is sometimes called called Cypro-Phoenician. 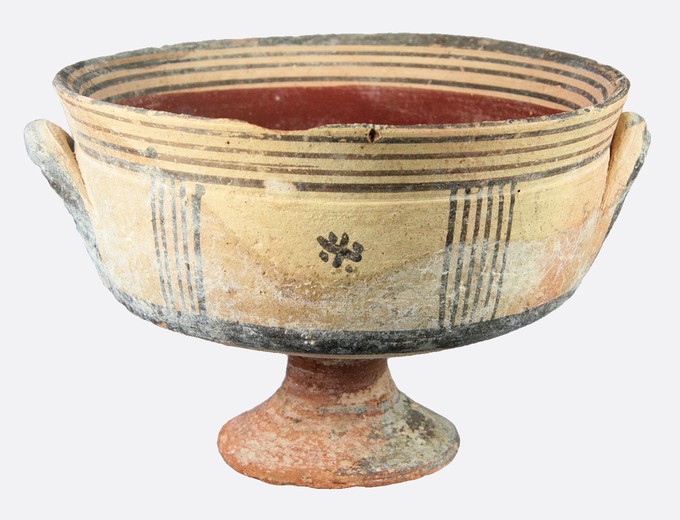