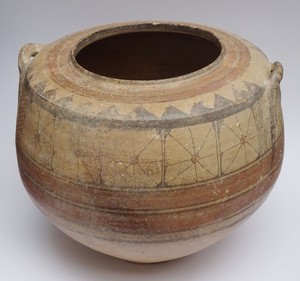 A large bichrome jar (Stamnos) of unusual shape and with unusual decoration of stylised flowers. It may originally have had a lid. It is interesting to note that the large 2 handles dishes used at the time would make an ideal lid. The early archaic was a period of great prosperity in Cyprus.