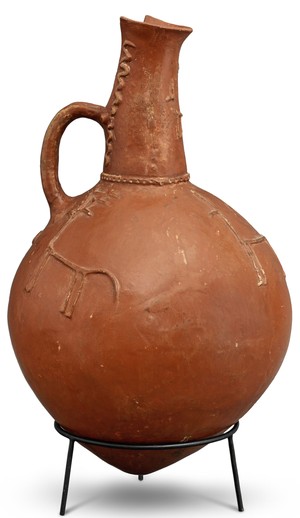 A very large, much restored Cypriot red polished ware flagon  with cut-away spout, the neck decorated with a deer and two applied stylised undulating snakes along the edges, the piriform body (pointed at the base) decorated with two applied stags with branching horns and two goats(?) with straight horns, with three raised disc motifs on the shoulder at the base of the handle and 2 more at its top.

For a large flagon with applied 'snake' motifs see D. Morris, The Art of Ancient Cyprus, Oxford, 1985, p. 230, pl. 261, and for similar applied stag decoration see p. 271. pl. 298. Morris notes that the deer of ancient Cyprus were fallow deer, dama mesopotamica, which in the Early Bronze Age became a popular motif on pottery. These along with other horned animals, principally bulls and some goats, are thought to have been male fertility symbols. He also observes that although the undulating 'snake' decorations on Bronze Age pots never depict a head it seems likely that they do indeed represent snakes. Snakes are thought to have been a chthonic sybol due to their living in holes in the earth. Cyprus is home to the highly venomous Levant viper, which can grow up to one and a half meters long.

When I bought the piece (see photo) it was covered with a nasty thick layer of acrylic paint all over. Since this I have had the added paint stripped off.   It covered a botched restoration in which much of the red slip near the many breaks had been lost in attempting to file over the joints to conceal them.  There had been about 150 pieces, plus few small areas were missing and restored.  A decision on whether to restore the stripped areas further will be taken shortly.  Personally I do not feel the need to preserve the botched work, but the breaks should be visible and the few small missing or restored parts painted a slightly different shade or colour so they are easily distinguished.