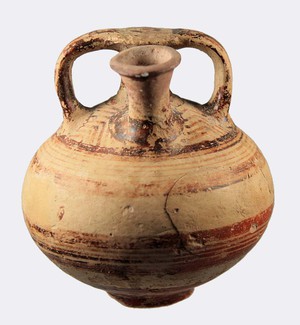 The stirrup jar is the most ubiquitous Mycenaean form. The civilisation, named from the ancient city of Mycenae but actually a civilisation made up of allied city states, dominated Greece 1600 – 1100 BC and was the source of most classical Greek legends and stories, including the Trojan war which is thought to have been based on events around 1200 BC. Mycenaean III is Late Bronze age. This was the period after their conquest of the Minoans in Crete (who had strongly influenced their culture). Following this they took Minoan Linear B to write down their own language. (The later, Classical Greek alphabet was formed by adding vowels to Phoenician writing.) In the later 12th century Mycenaean civilisation was destroyed by raids from “sea people” and Dorian invasions. The stirrup jar with false neck originated in Middle Minoan Crete (1700-1500BC) and is a typical form in Minoan and Mycenaean cultures, used for oil (or, in larger versions, wine). Like the later "pilgrim" jar it is a convenient shape for travelling with narrow neck which could be stoppered and handles for attaching it.  Much pottery of this kind was exported, especially to Cyprus and is found in high status tombs. Since the find-site of this jar is now unknown and many Cypriot sites have been plundered, it may have been found there. In response to the attacks on Greece and the Collapse of the Mycenaean civilisation there, many Greeks escaped to Cyprus in the 12th and 11th centuries BC and were probably among those who created Cypriot made Mycenaean ware in the 12th century BC. This was not the first wheel-made made style of Cypriot pottery: both Red Lustrous pottery and Wheelmade Bichrome ware date from early in the Late Bronze Age, but these tended to die out, making way for handmade White-slip and Base Ring wares. In the subsequent early Iron Age the Mycenaean and native styles blended. (Spout restored.) 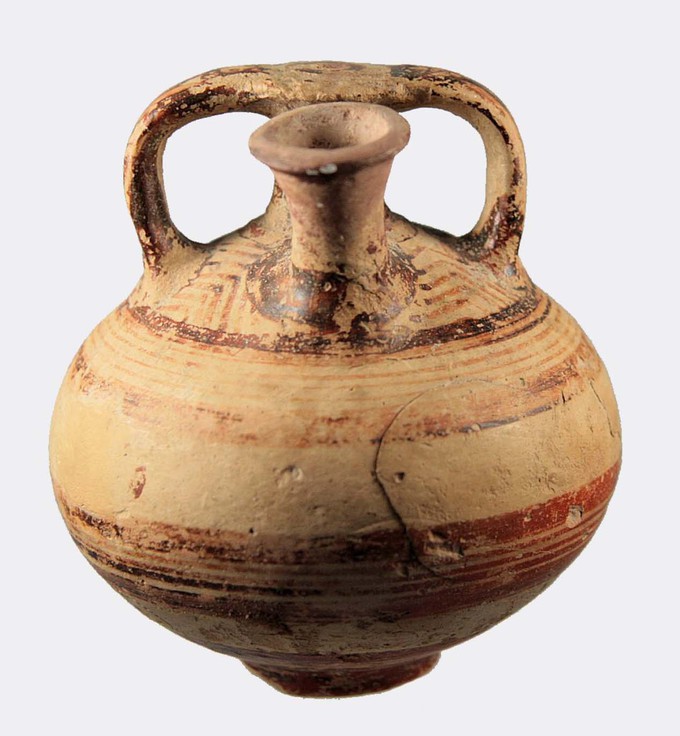