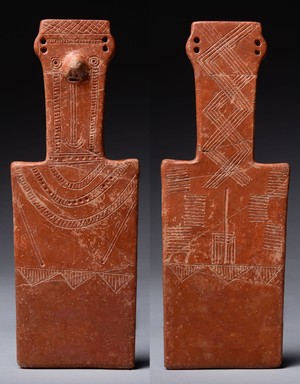 This is the nearest I have to a "classic" shoulder figure, before arms and other details were added in relief in a slightly later period, though the head is of an unusual shape, tall but narrow and tapering slightly downwards.  As is normal with the classic form of early plank figure, the nose is the only part projecting from the plank, but also, as in about half of these figures, with sideways projecting ears, pierced for earring. Other details of the face, necklaces and patterned clothing, plus long hair at the back, are depicted by incised lines, originally filled with white lime.  Lines on the face not representing facial features may represent facial painting or tattoos or scarification.  In the centre of the back is a "paintbrush" shaped feature found on many plank figures, sometimes interpreted as a counterweight to the necklaces.  It is sometimes linked to the Brush Figures which have been found in tombs, dating from up to 50 years before the planks and dying out 100 years before them, which have been identified as possibly carding combs, or by Desmond Morris as a type of figure prefiguring Plank Figures. The 2 double diagonal lines on the  upper half of the body were once thought to be arms but now thought more likely to be long ornamental pins to fix clothing, as have been found in tombs.

This figure is very close to two others in Vassos Karageorghis's "The Choroplastic Art of Ancient Cyprus", most especially  one in the Cyprus Museum, Nicosia, probably from Vounous - Plate XXV, Cat. No Bc.2 & P.59 which is almost identical.  This was almost certainly made by the same potter.    The bottom quarter of the figure is a restoration, and the rest is restored from 7 pieces.  The first restoration had been a little too long.  However the piece was broken again in transit between the Leland Little's packers and Art Ancient , London.  It was restored shorter, but now too short.  I plan to re-restore the lower edge a couple of centimetres longer, in line with the piece in the Cyprus Museum, mentioned above, and have photoshopped the images here, in line with my intention.  The lowest band of incised lines, forming triangles, was almost certainly deeper.  I imagine that the triangles were repeated upside down, thus forming diamond shapes between them. Normally this pattern would have the diamonds filled with parallel lines, rather than the triangles, but this way would not be very unusual. However restorations should only show what is almost certain and not speculate too much.

See my narrow-necked "Plank Figure" below ( http://ant.david-johnson.co.uk/catalogue/59 ) for more general comments about plank figures: their development and possible purpose.

((Ex Museum of Cyprus, Jacksonville, New Carolina, USA. Assembled by Dr Takay Crist after the Turkish invasion of North Cyprus and opened to the public as a museum in 1988. This century the museum has not made significant acquisitions. It consisted of antiquities, documents, maps paintings and artefacts and was endorsed and by the President of Cyprus and the ambassador, as saving the antiquities from the market and making them available to the public and for study. The sale of the entire museum collection represents a betrayal of the trust of Cyprus and almost all record of the provenance and history of the pieces seems to have been lost, including their dates of acquisition.)) 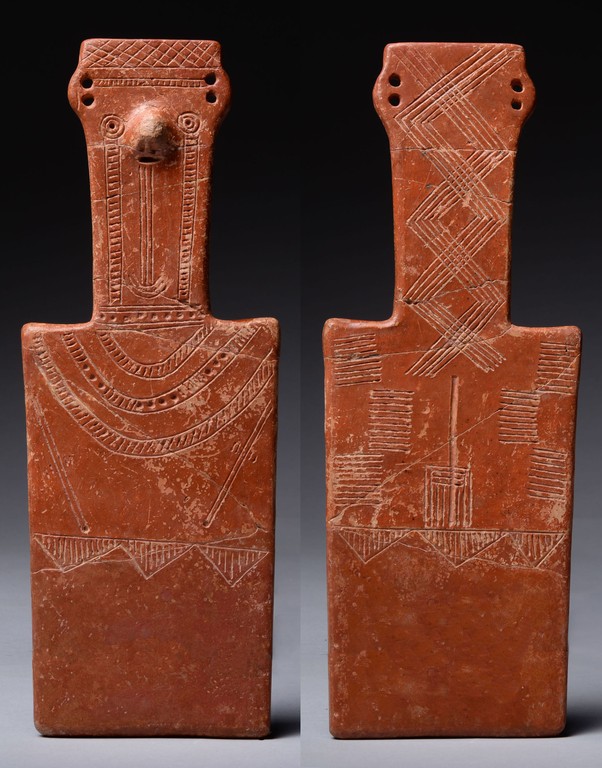