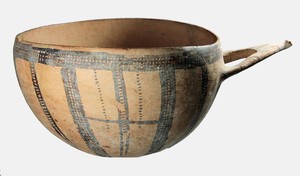 Base Ring ware and White Slip ware are the two main types of Late Bronze Age pottery, along with a monochrome ware, all hand made. White Slip Ware comes in only a few forms, the most common one being the hemispherical milk bowl, usually as here with a wishbone shaped handle. This handle shape is typical of Cypriot Bronze Age bowls from the early bronze age on, and even sometimes appears echoed in the iron age (see my large dish). Frequently the hemi-spherical shape is almost perfect and may have been moulded around a gourd. (Gourds are known to have been used as containers for liquids.) Unlike Base ring ware very few White Slip shapes have flat bottoms. Often, as here, the white slip isn’t very white. White Slip Ware must have been popular at the time (as it is now with modern collectors).

Chronologically, there was a minimal Proto White Slip (LCIA 1650-1550BC), then very thin-walled White Slip I (LCIA2) which many consider the most pleasing and inventive, and finally White slip II, such as this, 1550-1200BC where the decoration became more mechanical and the pottery thicker.

A coating of pale liquid clay (slip) forms the base on which dark lines are painted. In the White Slip ware most of the surface is left blank with bands of cross hatching, or other patterning (especially diamond or lozenge shapes), passing horizontally and vertically (ie radially from the bottom). Handmade White Slip is a refinement of Middle Bronze Age White Painted ware, but fired at a higher temperature. This itself becomes the source of the transitional 12th century Proto White painted ware and then the dominant (wheel-made) Early Iron Age wares. Repaired from 4 pieces – small rim restoration. 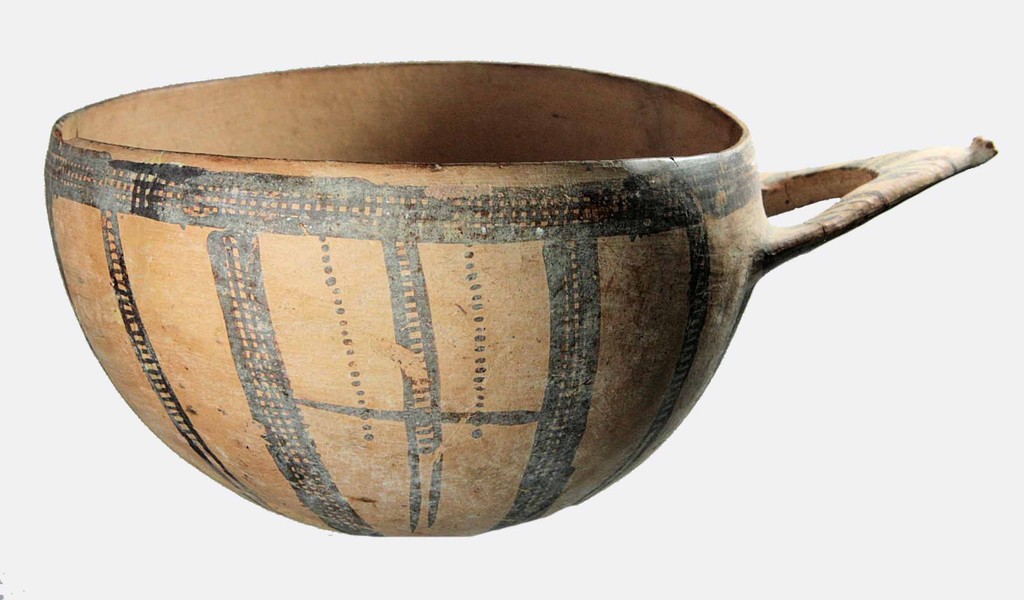