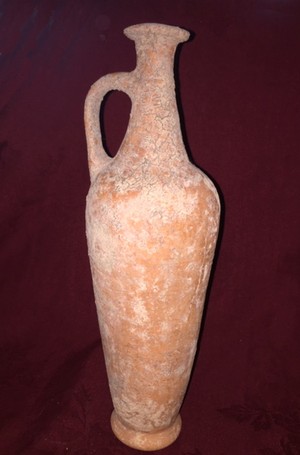 This piece was found in Samaria, in the Levant. It has a circular potters' mark on the bottom. This type is a wider version of the "Spindle Bottle", which was the most common (and earliest) form of this ware, making up more than half of it.  The other two main forms were lentoid flasks (sometimes called Pilgrim Flasks) and arm shaped vessels, occasionally called "Libation Arms" due to their probable use in rituals. There are a few other shapes found only in Cyprus and very rare.  Red Lustrous Ware was the first ware made in Cyprus using the potters wheel, along with Plain White Ware and slightly later another minor ware, Wheelmade Bichrome ware (sometimes called Cypro-Phoenician because it is found often in the Levant).  Both were once believed to be imports but have been proved by chemical analysis of the clay to be made in Cyprus.  A cruder version in course ware has recently been proved to be also manufactured in Cyprus, cashing in on the popularity of the original, but that usually has a darker tone.  This piece is lighter than usual.  So is it a Cypriot export to the Levant or a rare local imitation? Certainly other Cypriot products were imitated, though usually relatively crudely.

Red Lustrous ware is very widely distributed in the Eastern Mediterranean, especially in Egypt, Syria, Palestine and Cilicia (South Turkey), but also in Central Turkey and Crete. However it is also rare, a combination that suggests it was highly prized and expensive.  It probably contained a particular highly prized and expensive content, possibly an oil used in anointing the dead, since it seems to come only from ritual contexts, mostly from tombs. It is strange given these wares that the use of the wheel did not catch on in Cyprus, for most mainstream wares, till late in the Late Bronze Age, though it had existed since 3000BC on the continent.  It was also fired at an unusually high temperature for the time in Cyprus (around 900ºC) and is made of very refined, highly levigated clay (like base ring I ware) and was burnished, possibly with stones. It is self-slipped (ie the slip is the same as the fabric clay).  However it is argued that the ware could have grown out of the established Red Polished Ware of the Early and Middle Bronze Age.

Marks of roots and some calcerous deposits, probably from frequent inundation in the tomb - a common occurrence in this limestone landscape.

(Found in Samaria, Ex collection of K Baidun, grandfather of the dealer Alan Baidun, who founded the business in 1930. Acquired prior to 1978.)