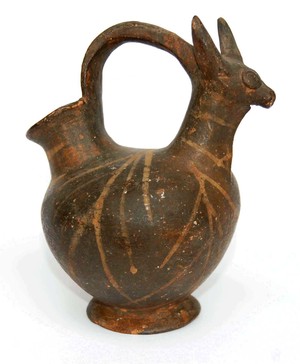 A fine Base Ring II grey-slip ware pottery askos in the form of a stylised wine-skin with a bull's head spout and arched handle, with opening for filling at the rear. An askos is a type of vessel used to pour oil or, in larger versions, wine. Animal shaped askoi are common, especially rams, goats or sitting birds, but also deer with antlers, and most especially the bull. Usually they have legs but this one is a compromise with a wine skin (animal skin container for wine) with a base-ring. While many pottery shapes were produced in bulk in this period, these animal forms are often one-off creations. However this askos shape was also used for large jugs and very similar askoi exist as late as the Archaic (600-700 BC). There seems to have been a cult of the bull, with bull-horn forms presiding in late Bronze Age temples. In modern Cyprus and several other cultures bull horns or heads are set up high on posts or buildings. Images of bull heads on the rims of some early and mid Bronze Age Cypriot pottery, some seemingly on posts, suggest they did the same.. Throughout the Bronze Age images of bulls are common, especially as Base Ring ware I and II. (One horn restored and handle repaired.) 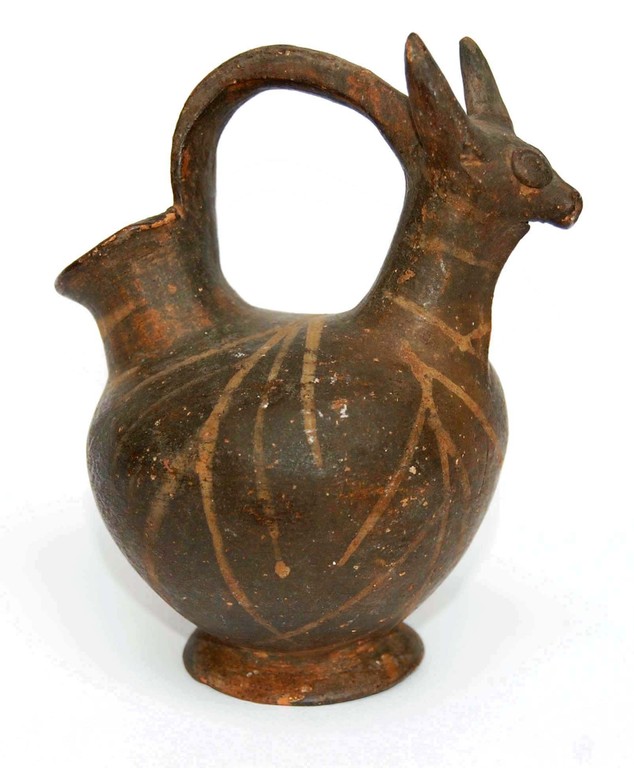