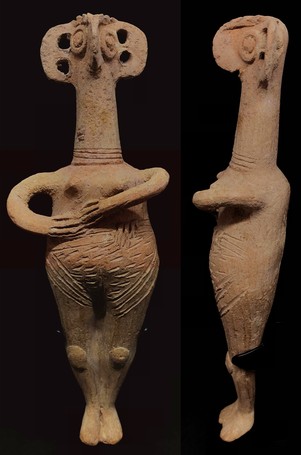 Together with "Flathead Figures", so called Earring Figures (also sometimes called Bird-head figures) are the chief anthropomorphic figurines of the Late Bronze Age. They are both sometimes referred to as "Astarte" figures, though the similarity to earlier Syro-Hittite figurines of the fertility goddess Astarte is more obvious in Earring figures.  (Astarte, also called Ishtar, was an earlier precursor of Aphrodite, originating in the Middle East and probably introduced later to Cyprus by the Phoenicians.) However since the Hittite figures, with similar, distorted bird-like faces, huge ears, broad hips and similarly emphasised pubic area, were quite a lot earlier, the influence must have come through imported heirlooms and they may not have had the same identity or meaning in Cyprus.

Originally Earring Figures with pierced ears all had large, pottery earrings through their exaggerated ears (here, as in the majority of these figures, now missing).  Earrings through pierced ears are found repeatedly in Cypriot figures from the Early Bronze Age onwards in both males and females and may perhaps be a mark of status. However there are a very small number of Earring Figures with no holes in their ears and instead studs through ears suggested by clay additions similar to those used to depict eyes in all figurines in the Late Bronze Age, both anthropomorphic and zoomorphic. The exaggeratedly emphasised pubic area (incised parallel lines and dashes extending from the upper thighs up to the waist and looking like knickers) is found in both types of figure, though the large hips are more specific to Earring Figures.  Both types continued to be made with almost no variation for 250 years, without clear predecessors or linked later figures.  This lack of variation is characteristic of images of divinities and they are generally considered to represent a Fertility Goddess, though a few people have cast doubt on this recently.  Since they (and the Flatheads) usually have their toes pointed and could only stand by leaning against a wall, it is widely believed that they were intended to lie down.

There are two types, the smaller solid ones, which are of a size to fit easily in the hand, and larger hollow ones.  This figure is hollow.  They can be 16cm- 29cm. The solid figures are smaller: 15.6-11cm)   Karageorghis, in the second of his 7 volumes “The Coroplastic Art of Ancient Cyprus", illustrates 37 of the hollow type, 19 without a baby and 19 holding a baby with the left arm (plus 23 smaller and solid, 13 with a baby).  My figure shows signs of having once included a baby. The left arm is curved forward as though to hold one. There are traces of applied material with 3 incisions to indicate fingers on the neck, and more material with 4 vertical incised lines to indicate toes (or the lower edge of a garment) below the left arm and superimposed over the many incisions indicating the pubic triangle in the front. Many of the babies, rather than seeming to recline, are depicted upright with arms spread which would fit with the position of the small projections on the neck. In some the arms seem almost like wings. There are a few other examples of an Earring figure with broken or missing baby.

Photos from 1988 show my figure without lower legs below the applied discs of the knees, so unless the broken off piece was detached and reapplied later, this part must be a reconstruction. Unfortunately the restoration was so skilful that the join cannot be detected.  The restoration seems fairly idiomatic, though perhaps the lower leg would have been a little longer and more tapered, with smaller feet. This is more like legs and feet of the Flat-head figures.  However the more than 200 extant versions of this type are quite various, though often broken at the feet.  As is normal, clearly the body and limbs have been shaved to achieve the final shape, before the incised and applied details were added.

Like many of this type my figure has an unnaturally long neck - longer in fact than the thighs.  This links it to my Plank figure from hundreds of years earlier, and to all the Chalcolithic cruciform figures. Although a very small number of these figures have eyebrows delineated by vertical strokes, mine seems to be unique among those I have found in having eyebrows applied with extra clay.  The emphasised knees on my figure are rare but found in a few examples.  Both types of figure have been found in all parts of the island and (like the earlier Plank Figures) substantially in both tombs and settlements, so cannot have been primarily for funereal use.  Tombs were moistly communal, and may contain bulls plus more than one figure, but never both anthropomorphic types together.  This seems to suggest different kin groups had some sort of alliegence to one deity or the other.  Daisy Knox recorded 112 examples, some fragmentary.

Some accretions, though they appear more slightly brown rather than white.  TL (Thermo-Luminescence) tested by QED Labortatoire, Paris 2015, which proved an age consistent with the Late Bronze Age.  Old photos however show it with no legs below the knees, so these are restorations.  They have been restored too short and with feet too large.  I may have the lower legs re-restored to be more typical. 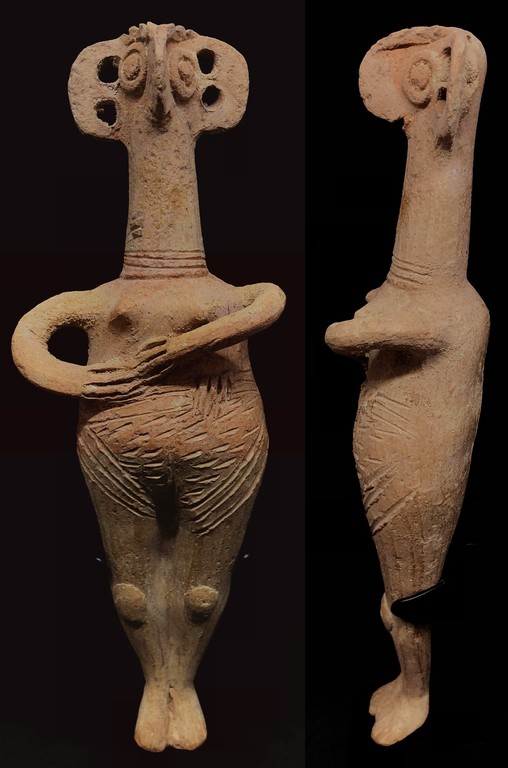