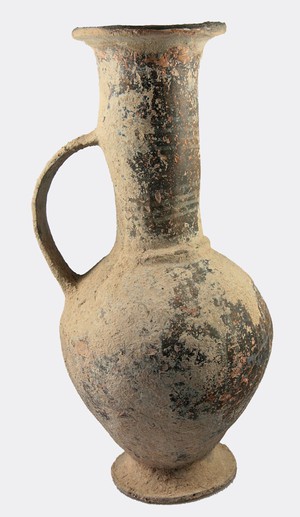 This type of vessel is known as a poppy flask (or bilbil) due to its (inverted) resemblance to the seed head from the poppy plant from which opium is extracted. Chemical analysis of the residues in the smaller, slimmer juglets with this shape has suggested that they were used for storing opiates: an early example of brand-recognition packaging. Nothing similar has been found so far in these much larger flasks (Base Ring I or II). Perhaps they were re-used or, though clearly linked as a shape, may not have stored opium (scented oil is suggested), or may have served wine with which the opium was mixed. The drug seems to have been an extremely important trading commodity for ancient Cyprus and was exported throughout the Mediterranean. Large numbers of bilbils were found at the important 18th Dynastysite of Amarna in Egypt. The shape was copied by Egyptians and Phillistines. (Recently the analysis of residues as opium has been questioned, but the widespread use of bulbils for scented oils confirmed.)

In the late Bronze Age the decoration on pottery was usually (as here) painted on, as it had been in the pre-bronze Chalcolithic Age. (The exception was Base Ring I ware, with relief decoration: see tankard above). In contrast decoration on early Bronze Age pottery had been incised. Base Ring II, though quite refined is less thin walled and made with somewhat coarser clay than Bass Ring I. Pottery production in Early and Middle Bronze ages had been mostly household based but now in the Late BA was more professionalized and some standardization of products resulted. This piece has been mended (rim and handle) and most of the decoration (groups of pale horizontal bands on the neck and vertical ones on the body) are obscured by surface encrustation which could possibly be expertly removed by soaking and then progressive local dissolving with mild acid, but at great financial cost. Many Cypriot tombs are prone to periodic flooding which leaves limestone residues. Similar encrustation can be seen on others of my pieces (eg the small Etruscan dish and large mid bronze age Cypriot pouring-bowl) and many prefer them left this way. 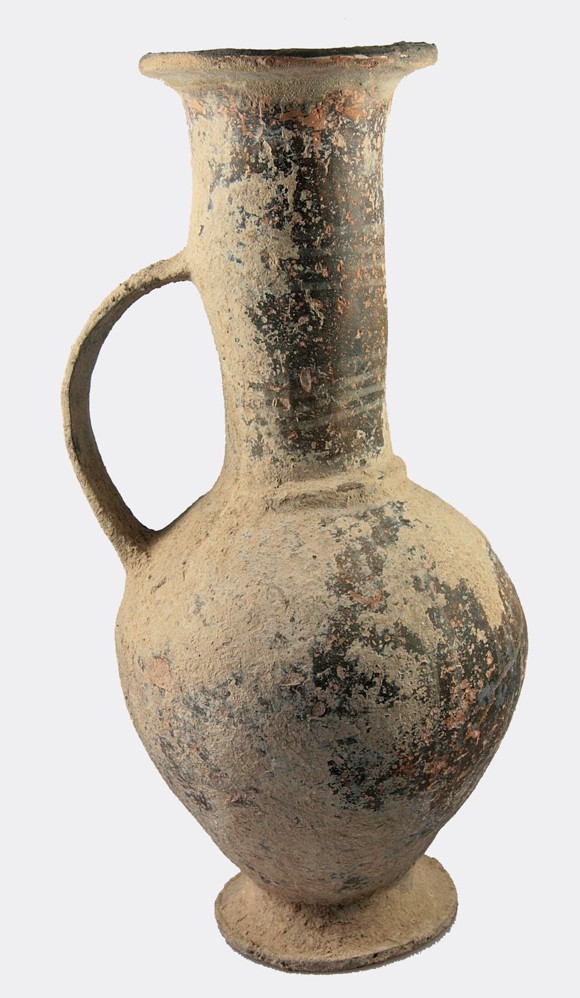