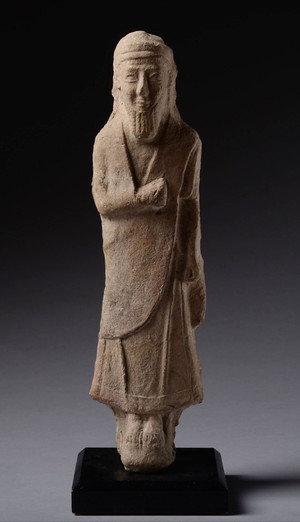 Archaic terracotta figure from the early or middle 7th century BC with Assyrian style beard and hair.  Such votive figures were left in large numbers at shrines in the Archaic period and ones such as this, though made in large numbers and bought, probably notionally represented the donor, taking his place at the shrine.  The figure was made in a one-sided mould, pressed into it in a way that often shows finger marks on the flat back.  The costume and pose were typical of Archaic Cyprus, with Levantine and Assyrian influence. He wears a long, short sleeved garment similar to the later Greek Chiton, and over it a rectangle of woolen cloth, usually pinned with a fibula at the left shoulder (like the later Greek Hymation) and his right arm seems to rest in a loop of it.  Both garments still show an edging stripe of red paint. His cap is layered and seems not to be the 6th century Phoenician style conical cap, often seen on slightly later figures and thought to be a badge of rank. The beard is very unusual being depicted in vertical rows of ringlets, in the Assyrian style, rather than the more familiar 6th century Phoenician style of horizontal rows. The Assyrians claimed to have conquered Cyprus in 709 BC, supposedly at the behest of Kition which was a colony of the Phoenicians.  They may only have become fully independent again in 609BC.  During this period they may have paid tribute to Assyria but the local kings were left to govern. The figure doesn't yet have the typical later archaic almond shaped eyes derived from archaic Greek models.  It is a carefully modelled figure, like the limestone archaic sculptures, and quite different from the mass produced figures typically made and bought for rural shrines.  However it was probably also a votive figure and has a completely flat, rough back, so was clearly meant to be seen only from in front, perhaps against a wall.

I have now been told that the figure originated in the Cyprus Exploration Fund excavations at Salamis in 1890, almost certainly at a specific site called Toumba (hill) that produced lots of votive statues in terracotta (most fragmentary but some of huge proportions up to 3.5 m high). The piece can be seen in a photo in the Munro Archive in the Ashmolean Museum archive. John Munro was one of the excavators In 1890 and his archive shows numerous items which have disappeared or else are items in museums whose provenance was obscured. The CEF was a British scholarly body established in 1887 to carry out scientific excavation on Cyprus under the control of subscribing academic institutions, such as the Society for the Promotion of Hellenic Studies in London, the Ashmolean Museum in Oxford, the Fitzwilliam Museum, Cambridge, and a number of leading British public schools. The majority of the finds went to the British Museum as the national collection, but the subscribing museums and colleges also received a share of the artefacts recovered.

The Cyprus Museum has a less distinct figure, found at Arsos, seemingly from the same mould after it had been much worn (Karageorghis "The Coroplastic art of Ancient Cyprus IV" p20, Cat 38 (plate IX:3). 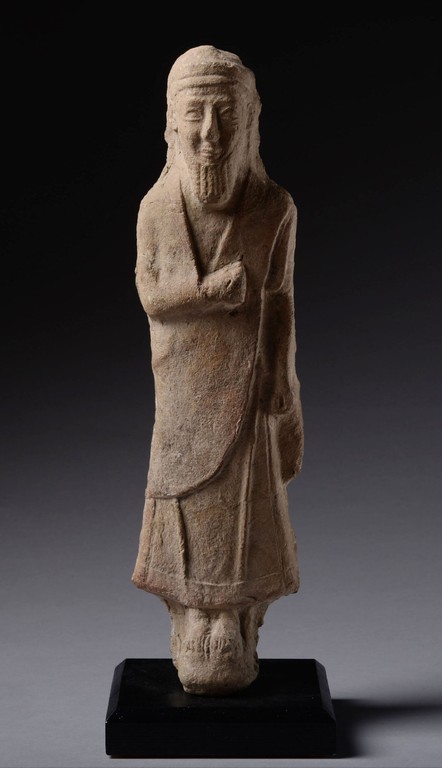