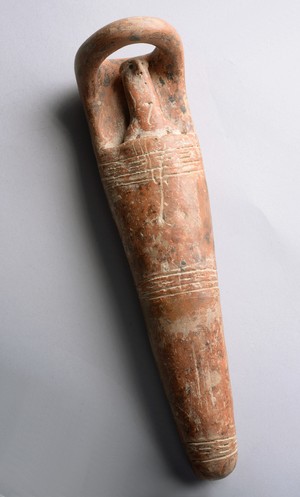 Cradle Figure (reserved and being considered, not yet in collection)

Cradle figures are believed to depict swaddled babies (or occasionally two babies) tied to cradle board, to be carried on the mother's back, with a loop projecting forward to protect the head, as could still be found quite recently, for example, among some natives North American groups.  The baby has eyes, nose, nostrils and eyebrows and either a chin or a mouth (?) and shows the armpits and top of arms just above the swaddling.  Usually such figures are similar to plank figures, almost flat and rectangular except for the protective loop above the head, but this one is uniquely almost cone shaped and nearly as thick as it is wide. This may mean that it is a late example when the tradition of plank figures had disintegrated into a tiny number of divergent experimental figures.  Cradle figures are very rare: Daisy Knox knows of 30 (whereas she lists over 200 plank figures), but there are probably a few others in private collections, mostly looted from tombs.  Despite this, unlike multi-headed plank figures, which only come from one settlement in a narrower time range, they seem to be found in contexts from Early Cypriot III to near the end of the Middle Cypriot and over a wider area. They are usually considered a type of Plank Figure.  When the latter were considered fertility goddesses, cradle figures were seen similarly to refer to fertility, perhaps magically to aid fertility and childbirth, like the Chalcolithic cruciform figures.  However Priscilla Keswani's investigations of mortuary rituals suggested  Early and Middle Bronze Age Cypriots used dual obsequies, normally connected by anthropologists with some kind of ancestor reverence.  In the light of this it has been suggested (and I agree) that plank figures may be ancestor figures.  In many societies babies are seen as only partly entered into human society and still partly in the realm of the ancestors from which they came.  Thus, though by definition not ancestors, they have some of the same spiritual power.  This lead some earlier Chalcolithic cultures to bury babies under the floor of houses, presumably to retain their spirit power within the household.  Many cradle figures show significant wear, suggesting long use and handling in the settlement (probably in a house) before most were finally deposited in tombs. 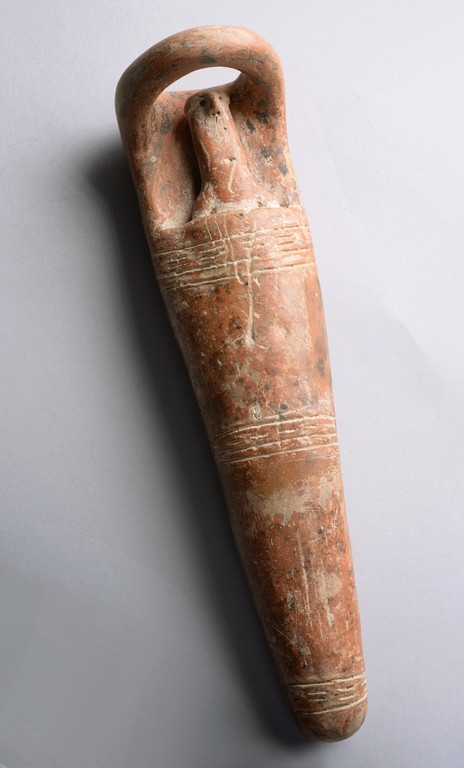