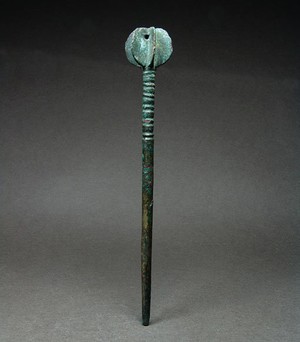 Elaborate and massive bronze pin (24gm), probably for securing clothing, as in the Early and Middle Bronze Ages, though Middle Bronze Age examples of toggle pins are often pierced at the centre of the shaft, here it is the head which is pierced.  Presumably this was to do with tying it to the clothing (cloak?), though since many of the pots are pierced to hang them on the wall with a thong/string, this is also possible, along perhaps with, perhaps, their clothes.  Late Bronze Age versions can have an elaborate knob, sometimes made of bone or ivory or gold, or even be made entirely of gold, or gilded as here.  The dealer advertised it as showing some original golden bronze on the shaft, but I am confident this is gilding.  Presumably a thin gold leaf hammered on as it still is today.  The ribs of the elaborate knob on this one are reminiscent of contemporary mace heads. I am unsure if the knob was gilded (some gentle rubbing of one side of a flange revealed a thin glint but it might be a shallow modern scratch into the bronze). Compare to my Roman fibula.    cf a similar pin in Antiken aus Berliner Pribvatbesitz. Exhibition catalogue.  Berlin 1975 (No.345), presumably the source of the dating of this one.  Point damaged- it would have been sharp. (Supplied with with ‘right-to-dispose’ form signed by Hirsch. Also scans of the export permit issued by Bavarian authorities).