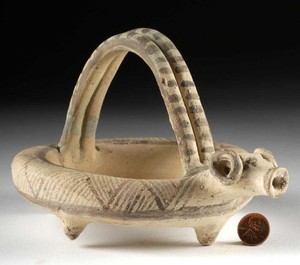 A White Painted Ware ring vessel of a type sometimes called a ring Askos.  The more usual type with small offering bowls and sometimes animals standing on the ring is usually called a ring kenos, though Desmond Morris thought the name unsuitable and clearly it cannot be applied to this type with no offering bowls. An askos was used to pour libations.  This vessel has a ram's head for its spout and nubbin feet on the underside and basket handle made from two strands of clay.  It seems to be intended to contain liquid (oil or wine?). The ring form must have been complex to make which would have made it a prestigious gift for a funeral. As far as I know all examples of the ring vessel form have been found in graves and they extend from one possible example in the Chalcolithic to the end of the Archaic Period, after which it does not reappear. They may have originated in Sumer and spread to Cyprus and Egypt by the early Bronze Age, appearing in the Mycenaean world in the Late BA. The shape has no practical reason but is very likely to have been symbolic, as in many cultures an endless ring symbolises eternity or the cosmos, or the cycles of nature (as in our wedding rings) making it suitable also for a funeral.

The handle has been reattached at juncture with the ring with restoration, and with repainting to the apex of the basket handle. Minute losses to tip of one of the ram's horns. TL test hole on underside of ringed body. Old collection labels on the underside of the body. The TL (thermoluminescence) Test proved the vessel is ancient.