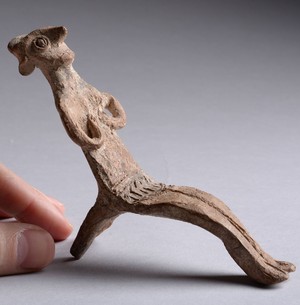 Much rarer small seated/reclining version of the Flathead base-ring figures, generally agreed to represent possibly divine fertility figures. D Knox states there are 12 extant. (see my hollow, standing version above for more discussion.) For some reason these small reclining figures are generally more plank-like than the others  and nearer in height to the solid figures (11-15cm) than the hollow ones (19-22cm). It should be remembered, however, that , like the prehistoric Cycladic figures, the not-seated Base Ring Ware "Earring" and "Flathead" figurines are generally agreed to have been intended to lie down. The pointed feet would not allow them to stand.  The seated figures are thus being raised up, not brought down.

These figures should probably not be called "Astarte" figures, as they once were.  The similarity of form to earlier Hittite figures of Astarte was only clearly apparent in the other "earring" type of LBA Base Ring Ware figurines, and the link to earlier Cypriot forms (and probably beliefs) are now more emphasised.  It is interesting to compare this figure with my Middle Bronze Age White Painted, seated figure. Were the intentions behind both the same, or had there been a change in beliefs in the approximately 300 year gap between the two types.