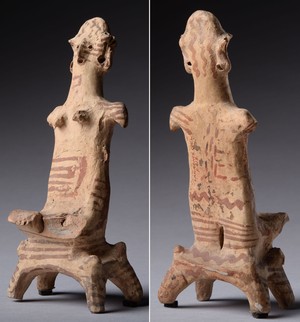 Extremely unusual plank-like female seated figure on stool, White Painted Ware from around MC II (or possibly early III?).  Ears pierced twice, the top piercing vertical. Legs unfortunately broken off and missing.  Red/brown painted lines on a cream slip, at the back and forehead representing hair, and on face horizontal lines reminiscent of incised decoration on Red Polished Ware plank figures.  It is not clear if this is just decoration or represents face painting, tattoos or scarification.  The dashed lines on the back could be scarification or represent a detail of clothing, like the box-like shape on the chest and horizontal lines on shoulders and buttocks as well as on the stool. (Compare the back with my plank figure with narrow neck/head). The division of the buttocks is a nice touch. The flipper-like stub arms are found on a number of the late "shoulder" plank figures and "slab" plank figures. Only a small minority of classic double-rectangle, legless and armless Plank Figures have breasts (about 10%) and those that do are tiny and located far from a naturalistic position (near each shoulder), however this figure has notably larger breasts in a realistic position. Indeed at least half of the late, somewhat more realistic Plank Figures (often with arms) have breasts - still small but somewhat more realistically positioned.

Compare with (smaller) seated figure with child - V Karageorghis "Coroplastic Art of Ancient Cyprus Vol I, Plate CXXVI. However it is not clear if that figure, which is broken off some sort of base, should be considered a plank figure. (See also the model stool, Plate LIX.)   However, other than this possible example, none of the few, very late plank figures with indication of legs are depicted seated. Plank figures normally cannot stand unaided. Compare those with  the more naturalistic, earlier seated figures of the scenic compositions such as the "Vounous Bowl" which clearly depict live humans and are not plank-like.  Compare also with the seated variant of the unvarying Late Bronze Age "Flathead" Base-ring figurines generally considered to represent divinities.  Coincidentally those seated variants are usually also rather plank-like in shape and seated on (less explicit) stools, and also leaning back (in the photo above the figure has been propped to reduce this, otherwise it is rather unstable).

I am currently of the opinion this is a late, variant of the Classic plank figures, despite being seated and with more realistic breasts and the body being smaller and a little thicker than classic plank figures. By this I mean that I believe it was made as a conscious variant of a tradition and was probably made for the same purpose.  When sold in 1976 it stood on a stand which said "Statuette of Aphrodite Cyprus".  This reflected the belief from the late 19th century until quite recently, reinforced by the theory of Universal Archetypes put forward by Jung, that all early societies had a Great Mother fertility goddess.  Since the Cypriot Chalcolithic had figurines which clearly related to childbirth and the Late Bronze Age had 2 types of figurines which also clearly related to fertility and one of which looked very like earlier Hittite figures of Astarte, the intermediate Plank Figures were co-opted to be fertility goddesses, even though they mostly had no indication of sex and were angular and singularly inappropriately shaped for a fertility goddess. Indeed many archaeologists and academics are now questioning the identity of most of these figures as female and looking for other roles for them than goddesses.  My preferred solution among these is that they are ancestor figures (probably relating to specific ancestors).  Priscilla Keswani wrote a persuasive book (Mortuary Ritual and Society in Bronze Age Cyprus) arguing that in Early/Middle Bronze Age Cyprus, most funerals were double: the first at most a simple shallow burial with no grave goods and the second some time later, after the flesh had rotted off the bones, being a lavish feast with elaborate, often specially made grave offerings.  At this point the bones were put into the family tomb cut in the soft limestone, which was sometimes used for hundreds of years. This was the moment ( in line with the classic writing of anthropologist Robert Hertz) when, freed from the feared corrupting power of death the person could became an ancestor.  This suggests some version of ancestor veneration.  It is now accepted that Plank figures were used in settlements and in most cases only afterwards placed in tombs. It follows that, in line with many traditional cultures studied by anthropologists, these figures might be intended not merely to represent ancestors but to contain the spirit of an ancestor.  If they are spirits this would explain their flat  shape and (in the classic period) lack of limbs - in contrast to the more rounded depictions of people in the scenic compositions of daily life, both freestanding and on vessels. Cemeteries were always quite far away from the settlements, often up to a mile away, though usually within sight of the settlements.  This was a marked change from the Chalcolithic when the dead were sometimes buried under houses. It suggests some nervousness about the power of the dead.

Most plank figures, even in the very late transitional variants, continued to be made as Red Polished Ware, despite White Painted Ware having risen to dominance by the end of the period.  Karageorghis pointed out that this conservatism is characteristic of depictions of divinities (and if I am right that plank figures represent ancestor spirits the same would presumably apply). What the function was of the tiny number of eccentric figures made in the late Middle Bronze Age and Early Late Bronze Age I (between Plank figures and Base Ring Ware figures) is unclear.  This may well have been a period of transition to new beliefs as the old practices disappeared and new urban cultures started to appear.  In this context these transitional figures are seen as ancestors of the Late Bronze Age so called "Astarte" figures in that they often have legs and tend to have clear sexual features, and are not dominated by details of clothing and jewellery. 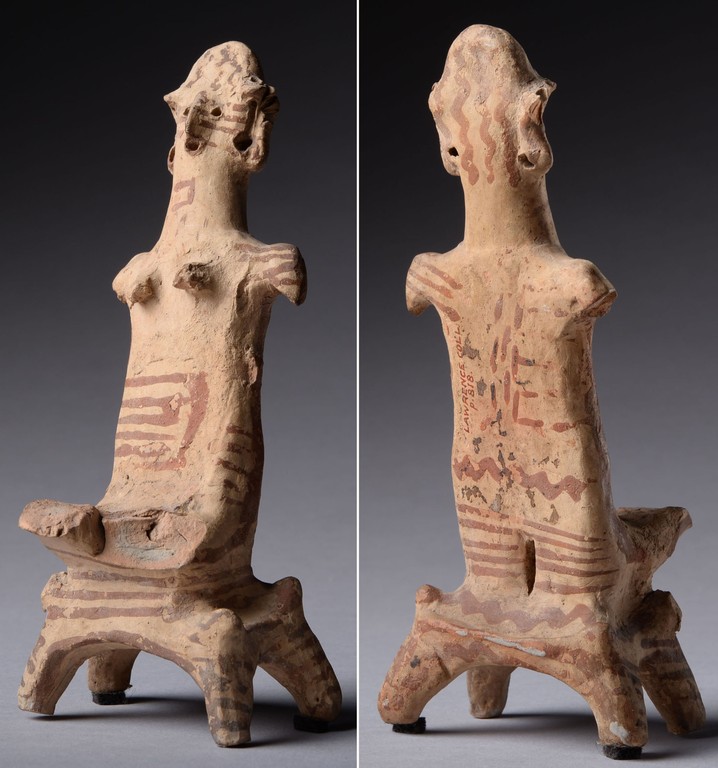