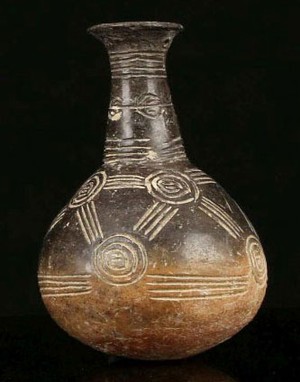 Small incised Black topped Red Polished Ware jar Incised.  These round bottomed bottles demonstrate the wide variations of the shape and decoration of small vessels in this period.  There is a huge range of incised motifs and combinations of motifs found on them, all usually filled with white lime. Those using circular motifs are particularly found in the North of the island and to a lesser extent in the centre, but almost not at all in the South.  Most other motifs are found equally everywhere. The North is also where most Black topped Red Polished ware comes from. Later in the period, in the North East, the circle motif disappeared and the taller red/black bottles with finely-drawn chequerboards became dominant (see end of this period). The taller bottle has its neck pierced below the rim, presumably to hang it up.

(Ex collection John A Badman, The Monarch, Glastonbury in the 70s) 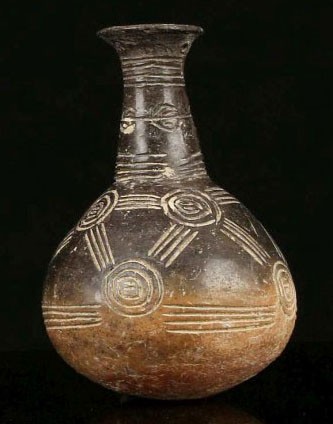