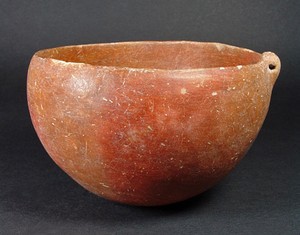 This is the basic and most common artefact of the Cypriot Early and Middle Bronze Age.  The basic shape, size and ware (covered in a red slip made from iron rich clay) is found through the Early and Middle Bronze Ages, either with the top edge (as here) turning slightly inward, or lower and more open. There are also slightly smaller versions which are less common.  There are also variants which are decorated with incised lines which were then filled with white lime.  Bowl could also have a black inside and top edge, or it could have patches of black, or be entirely black, created by firing in a low oxygen, reducing atmosphere to reduce the red iron oxide in the clay slip.  There is also a drabber version (where the slip can vary in tone considerably) known as Drab Polished Ware, found particularly in the South.

These were individual eating and drinking bowls which would have been held in the hand and eaten from with the other hand.  There is no evidence for eating implements.  There is a single pierced lug for suspension, perhaps from a peg in the wall, though there is evidence from tombs for nesting smaller bowls in a larger one, and dips were created in the floor to rest round-bottomed storage vessels.     Although almost all Early Bronze Age tombs contained Red Polished bowls, in the Early Bronze Age they were more commonly decorated.  In the Middle Bronze Age they became generally more numerous per interment and were now mostly plain.  For example in the famous tomb 22 at Vounous, which contained the so called "Vounous Bowl" (a model of some sort of ritual with 22 figures inside an enclosure - possibly representing a part of the funeral ritual) out of 22 objects in the tomb 14 were plain RPW bowls with pierced lug.  The bowls such as this one, found in tombs, had almost certainly been used in the funeral feast, indicate a fairly larger number of people taking part in this period. However the figure represented trying to look over the wall in the "Vounous Bowl"  suggests some, perhaps many, people were excluded from parts of the ritual.

(Ex Museum of Cyprus, Jacksonville, New Carolina, USA. Assembled by Dr Takay Crist after the Turkish invasion of North Cyprus and opened to the public as a museum in 1988. This century the museum has not made significant acquisitions. It consisted of antiquities, documents, maps paintings and artefacts and was endorsed and by the President of Cyprus and the ambassador, as saving the antiquities from the market and making them available to the public and for study. The auctioning of the entire museum collection on June 5th 2018 was a betrayal of the trust of Cyprus and almost all record of the provenance and history of the pieces seems to have been lost, including their dates of acquisition.) 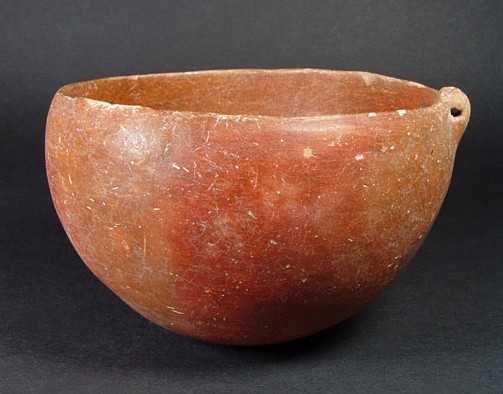