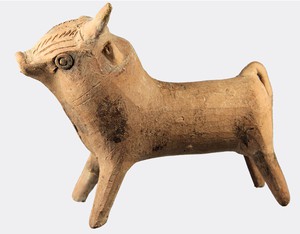 Base Ring ware bull figurine with incised and applied detail and some patches of black paint. It is unfortunately missing one horn and the opposite ear and has 3 legs restored. As is usual with these figures, final shaping seems to have been done by shaving clay from the body and legs with a knife as in White Shaved Ware of the period. It has a mouth hole and holes under the chest, but all are tiny, perhaps to let out air during firing. (Another right of the anus is modern: possibly a TL test sample.) It was sold to me as a Rhyton which is a vessel for drinking and pouring libations (originally in the form of an animal horn but later often in the shape of an animal). However this one has no filling hole so cannot belong to this common type of rhyton or askos. There are over 200 of this latter type, almost identical to this but with a strap handle and filling hole in the back. Over 400 bull figures are known, nearly 500 including bull protomes, found both in settlements and graves. However this type of hollow bull figurine with no filling hole is less common and started being made later than bull-jugs (generally being Late Cypriot IIC - very early IIIA).  It is probably some sort of cult  image and has been found in graves, but more often in settlements. Later at the end of the Late Bronze Age there was a smaller type of buff bull image. (There is an invisible loose particle inside this bull, but hardly adequate for it to be an intended rattle.)

Bull jugs are common in wealthy Cypriot tombs of the LCII (1450-1200) and may have had a ritual use. The large numbers of bull jugs suggest there was ritual (possibly communal) drinking involved in funeral rites, but these show signs of wear so must also have been used in life.

Neolithic settlers had introduced dogs to Cyprus, plus sheep, goats, fallow deer and probably pigs and a few cattle, which were probably left wild. The cattle died out in the 8th millenium BC but were reintroduced in large numbers in the Bronze Age. There seems to have been a cult of the bull, with bull-horn forms (“horns of consecration”) presiding in late Bronze Age temples, as in earlier Crete, Anatolia (Katal Huyuk) and Malta. A new (post Base Ring) type of painted pottery bull is found in sanctuaries in the 12th century. By now the early dominance of the mother goddess has been replaced by male gods. In modern Cyprus and several other cultures bull horns or heads are set up high on posts or buildings. Images of bull heads on the rims of some early and mid Bronze Age Cypriot pottery, some seemingly on posts, suggest they did the same. These complicated, impractical pots may have been made especially for tombs. Often such tomb pots were fired at lower temperatures, presumably because they didn’t have to withstand real use. Red Polished ware bull figures exist from early and mid Bronze Age, as well as White Painted ware versions from the mid Bronze Age. However in the late Bronze Age they are common especially as Base Ring ware I and II (and bull-head gold jewelry). Other human and animal figures are represented in pottery from tombs of the period but almost all are either human females or male animals with horns, which suggests a fertility symbolism. In a funeral context birth is linked to rebirth (as with the rebirth of corn from its burial in the ground). Perhaps from fertile creation to the original creation is not such a big step.  In Egypt the Apis bull was also an earthly representative of the original creation god, Atum.

In the Early Iron Age and even the classical, some bull figures, and bull images on pots continued to be made.

(3 legs restored and one ear and horn missing) 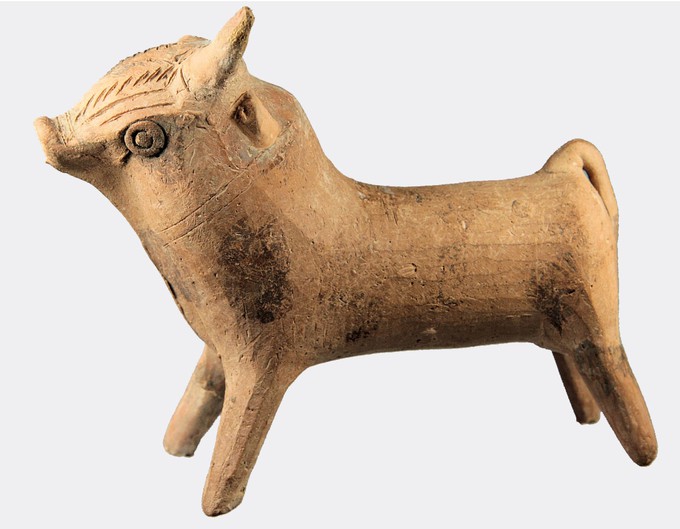