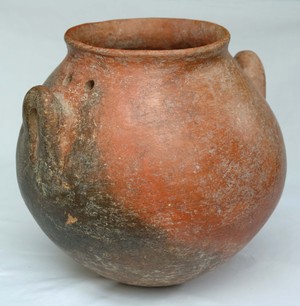 This Red Polished Ware pot which at first I assumed was Red/black mottled ware.  It is very heavy (2.55kg) with a thick base.  Although apparently round bottomed, there is actually a small flattened area, slightly off-centre.  The black area on one side (but not above the handle or on the base) which I originally took for black mottle of the fabric, I now think is soot marking from a fire.  It extends around the back (as seen in photo) almost to the other handle, though fainter. This does not fit the pattern of red/black-mottling. It was sold to me (and named on its Cypriot export permit) as a dinos (drink mixing pot), but I believe it was more likely a storage pot (Pyxis) as the nearest object I can find in the Swedish Expedition catalogue is labelled, or a cooking and mixing pot (possibly what is called a "stirring pot" which is placed up against but not on a fire). However usually cooking pots are coarser ware than this.  Also this is slightly unusual as cooking and storage pots were not regularly placed in tombs, and do not survive in settlements as well preserved as this.  It is complete but a chip on the burnt side seems to show a somewhat course fabric with possibly a small stone chip in it. This would be in line with the corser ware that cooking pots were made of, which often incorporating tiny fragments of stone, as this helps it withstand the changes of temperature better.  As well as the unusually shaped robust handles here are 2 holes on each side just above them and below the rim, possibly to secure a lid (which would be normal for a Pyxis (or so it can be lifted without burning the hands if associated with cooking).  The nearest equivalent is identified by Stewart as a Pyxis (class IX) variant B, subgroup f, though the handles inn his example are simple projections and there are no holes.  However he assumes it would have had a lid. Many early pots have means for suspension, probably to keep them out of the way, but this is more emphatic than usual and designed to hang in a level position. I am very unsure of the date.  If it had been mottled it would have been Early Bronze Age, but Stewart assumes his pot is EC III or Middle Bronze Age. It is a bit like some very early shapes, but utilitarian pots like this didn't change so much as fancier items, and it could easily be Middle Bronze Age.

(Mr A. N. Strouthos collection, exported from Cyprus to the UK under licence in 1978; and thence by descent to the present owner.) 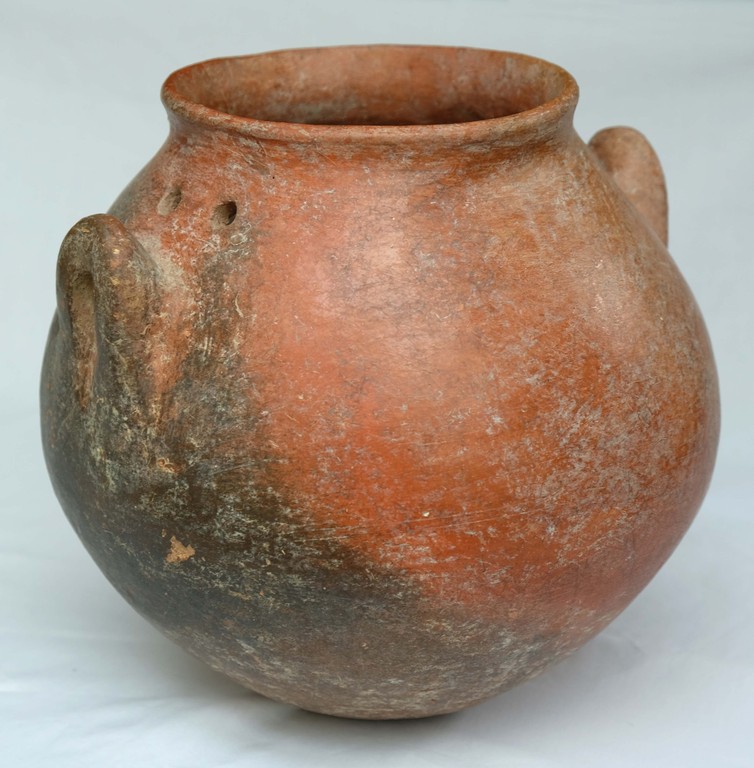