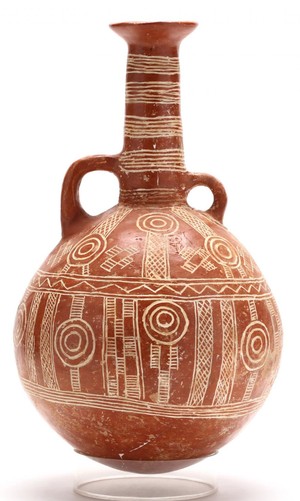 Large flagon, highly decorated with a dense pattern of hatched panels and concentric circles, similar to one from Morphou. The concentric circles seem to be a motif found mostly in central and North West Cyprus and from near the end of the Early Bronze Age and start of Middle Bronze Age, an important period in the history of Cyprus which also saw the production of the Plank Figures.  Incised Red Polished ware was covered in an Iron-rich glaze and the incised lines filled with lime.  New purchase.

The main handle is clearly reattached with restored areas around the lower attachment point which must originally have been decorated (as at the smaller handle) with concentric circles but is now plain. I cannot see much in the way of obvious mends but the surface seems to show extensive repainting, especially of the white lines which should be lime in the grooves but now looks like new paint. This might cover other expert restoration, particularly of the top of spout. However some exploratory sample dabs with acetone shows only a small amount of repainted red, in which case it may be the white which is giving it the feeling of repainting. However the white does not come off with acetone so perhaps it isn't acrylic paint. I shall have to get this assessed and probably make a difficult decision about uncovering more of the old surface.

(Ex Museum of Cyprus, Jacksonville, New Carolina, USA. Assembled by Dr Takay Crist after the Turkish invasion of North Cyprus and opened to the public as a museum in 1988. This century the museum has not made significantly acquisitions. It consisted of antiquities, documents, maps paintings and artefacts and was endorsed by the President of Cyprus as saving the antiquities from the market. The sale of the entire museum collection represents a betrayal of the trust of Cyprus and almost all record of the provenance and history of the pieces seems to have been lost, including their dates of acquisition. However I have traced the source of 3 pieces I bought at that auction and will now research this piece.) 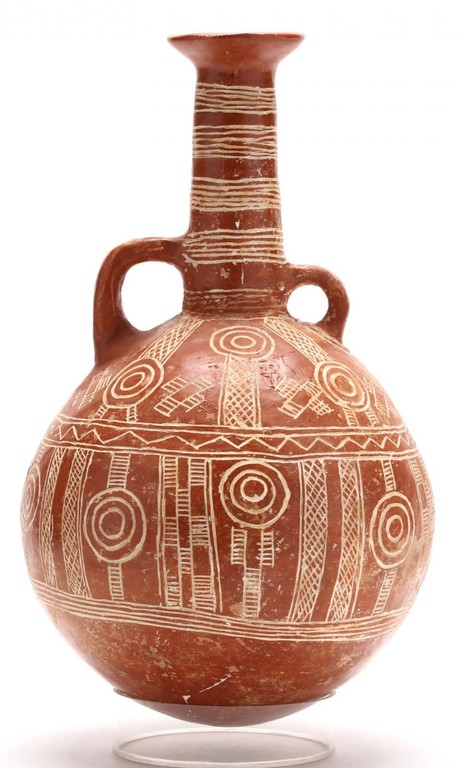