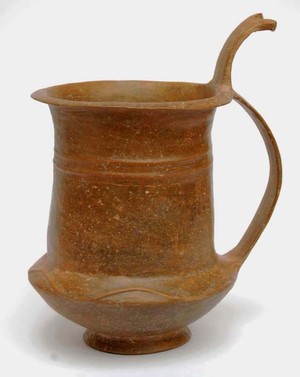 The form derives from Mid Bronze Age black slip ware, but Base Ring Ware was characterized by the   ring of pottery on the base which allowed it to sit directly on flat surfaces. Except for a few Mid Bronze Age items and very rare early Cypriot, this was the first Cypriot flat-bottomed ware since Philia culture pottery at the start of the Early Bronze Age.  Base Ring I ware in particular was a new, very thin-walled, refined pottery made from highly levigated (fine ground) clay and fired at a higher temperature than before. This tankard is astonishingly light, so is probably from earlier in this period. Figurines made with the same refined clay are often called Base Ring despite not having the ring.  Base Ring I Ware, such as this piece, had rope-like relief decoration and colour in shades of brown, while Base Ring II, which probably overlapped it and is somewhat heavier and less refined, was painted on a coating of grey clay slip. Why they chose such drab colours is unknown, though possibly it was in imitation of bronze or leather vessels.

The other main Cypriot Late Bronze Age pottery was White Slip ware with strips of black painted decoration against a creamy ground. Mycenaean Greek merchants had taken over from Minoan merchants in the later 1400s BC to supply luxury pottery.  A flood of Mycenaean pottery was imported and later produced by Greek settlers (who brought the potters wheel) and local imitators, especially in the final ECIII period (1200-1050BC). However, before that, the potters wheel was not generally used in Cyprus, though a few rarer types, such as Wheelman Bichrome Ware and Red Burnished ware did exist.  For a long time those wares were thought to be imports partly because it was assumed the use of the wheel would have become general earlier if it were Cypriot made.