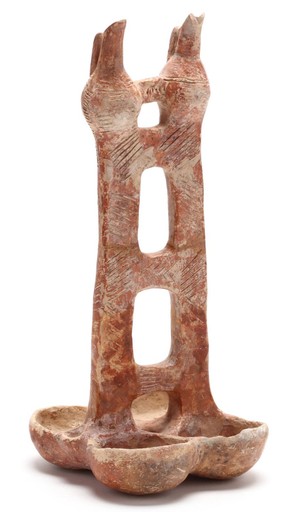 In the Early Cypriot - Middle Cypriot I kernoi appeared in Cyprus, in particular around Vounous in the North, with several linked bowls, assumed to be for several different offerings, perhaps of fruit and grains.  These had a central vertical handle which in many cases were very tall and flat, as here, with apertures cut to give a sort of ladder effect.   Most are Red Polished Ware and some, like this one, have incised decorations, usually filled with lime.  In four cases from Vounous a human plank-like figure was incorporated near the top.  This example, with four, linked bowls, is very unusual in having 2 small model jugs at the top (I know of no other example though they may well exist).  Model bowls and jugs are frequently added, standing on rims or shoulders of actual larger vessels in this same period, along with plank figures, horned animals and (more common later in the period) birds. All these elaborate ceramic items were rather impractical for use (and often less well fired, presumably because they did not have to stand up to frequent use) and were probably more for prestige display, and mostly made specifically for the funerals in which they were deposited or possibly other cult ceremonies. As with almost all well preserved objects this kernos will have been found in a rock-cut tomb. Elaborate kernoi of other kinds continued to be produced in Early Iron Age Cyprus, particularly the so called ring-kernoi.

(Ex Museum of Cyprus, Jacksonville, New Carolina, USA. Assembled by Dr Takay Crist after the Turkish invasion of North Cyprus and opened to the public as a museum in 1988. This century the museum has not made significant acquisitions. It consisted of antiquities, documents, maps paintings and artefacts and was endorsed and by the President of Cyprus and the ambassador, as saving the antiquities from the market and making them available to the public and for study. The sale of the entire museum collection represents a betrayal of the trust of Cyprus and almost all record of the provenance and history of the pieces seems to have been lost, including their dates of all acquisition. However I have managed to trace 2 of the pieces I bought to Charles Ede, 1989 - name (only) for previous owners. Another collector has discovered collection histories of many more pieces than the catalogue mentions, going back to the di Cesnola brothers, Desmond Morris and the Erlenmeyer collection.) 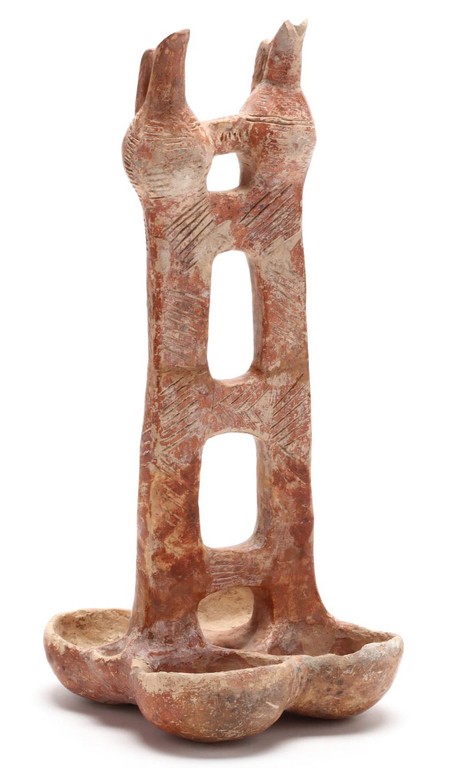