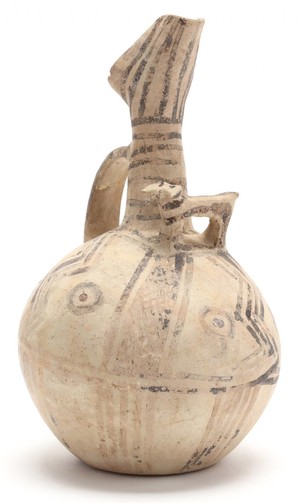 A Handmade White Painted Ware jug with a flat base, possibly from the very end of the Middle Bronze Age but more likely from Late Cypriot I, (1650-1775) (as it was listed by Charles Ede and the Cyprus Museum of Jacksonville).  Probably from Morphou, Toumba tou Skourou where most of the WPW jugs with animals standing on the shoulder were made. This kiln seems to have started to be active in the MC III and continued till the Archaic. The neck is long with trefoil spout and a stylised dog or bull is applied to the front shoulder.  The flat base would have been rounded earlier in the Middle Bronze Age.  Linear, zig-zag, cross hatch and circle-with-central-dot decoration. The main corpus of White Painted Ware is a characteristic high status ware of the Middle Bronze Age (extending into the start of the Late Bronze Ager) and is divided into types I - VII which are roughly chronological. This is possibly White Painted VI Ware, though the "eyes" are extremely rare and even without the dot would be more like Proto White Slip Ware which had a thicker slip and was fired at a higher temperature, and which followed these last examples of WPW.

WPW consists of a thin off-white or cream slip, with decoration painted in a colour which can range between black and red.  It is very common for this delicate decoration to have worn off, unlike the more robust White Slip Ware which followed it.  The animal standing on the shoulder of the jug was tentatively identified as a dog by V Karageorghis but since then as a bull.  Karageorghis classified it along with 2 other vessels with functionless dogs, plus the many amphorae with dog-shaped handles. This jug is quite large for its ware: most WPW vessels are small.

Reconstructed from several pieces and with wear to the painted decoration.

(Ex Museum of Cyprus, Jacksonville, New Carolina, USA. Assembled by Dr Takay Crist after the Turkish invasion of North Cyprus and opened to the public as a museum in 1988. It consisted of antiquities, documents, maps paintings and artefacts and was endorsed by the President of Cyprus as saving the antiquities from the market. The sale of the entire museum collection represents a betrayal of the trust of Cyprus and almost all record of the provenance and history of the pieces seems to have been lost, including their dates of acquisition. However I recognised this piece from an illustration elsewhere as having been sold by Charles Ede in 1989, who had bought it Ex the "Parker" collection on 4/7/1988 as part of a group of ten Cypriot pieces. Further information no longer available as purchase invoices from pre 1994 were long ago disposed of (information from Charles Ede). Published: Cypriot Pottery XI Cat. No 16 (illustrated)(1989). The Coroplastic Art of Ancient Cyprus, Volume I, 1991 Vassos Karageorghis p 191, Cat WHP.X3, illustrated Plate CXLVI 4/7/1988 .)