A rare and very early flat bottomed amphora with vertical handles. Red/black polished ware from early in the Early Cypriot period, covered in a dense pattern of incised chevrons and diagonal checkerboards, filled with white lime. This is almost a Black Polished Ware piece, with only a little red retained at the bottom. The black areas of the slip were achieved by reducing oxygen in the kiln to reduce the iron oxide in the clay (still visible in its red, iron oxide colouring at the bottom).  Possibly this flat bottom is a hang-over from the earlier Philia styles.  It is a Cypriot Bronze Age stylistic trait that the joining of handles to a pot body is normally effected by pushing the handle through holes in the body and then smoothing off on the inside.  This gives a particularly strong connection. In this vessel the handles have been pushed a considerable distance through the fabric but not smoothed off so that spikes have been left sticking out on the inside.  Whether this was because fingers could not reach far enough inside to do it (which could be the case) or they simply forgot is not clear.  Possibly the pot was made for the funeral it was used in, and dramatic external appearance was what mattered, rather than suitability for repeated re-use.

Very old reconstruction from many fragments.

October 2018, I finally received my 6 pieces from the Cyprus Museum (Jacksonville USA) dispersion auction, but very sadly despite paying an exorbitant amount to have them all professionally packed in individual boxes this piece was badly broken in transit. The box showed no damage. The heavy but soft pottery fabric caused by low temperature firing may be partly to blame, plus probably old glue which had weakened, plus quite a lot of missing fabric on the inside which had not been restored, leaving many vulnerable mend lines.  Most of the breaks were on old mend-lines but there were new ones and many small fragments.  I had several high-res photos from before the breakage and hoped the small pieces of exterior could all be re-used,and indeed all but the finest grains on the surfaces have been used with the minimum of in-fill, and the appearance seems very close to how it was.

(Ex Museum of Cyprus, Jacksonville, New Carolina, USA. Assembled by Dr Takay Crist after the Turkish invasion of North Cyprus and opened to the public as a museum in 1988. This century the museum has not made significant acquisitions. It consisted of antiquities, documents, maps paintings and artefacts and was endorsed and by the President of Cyprus and the ambassador, as saving the antiquities from the market and making them available to the public and for study. The sale of the entire museum collection represents a betrayal of the trust of Cyprus and almost all record of the provenance and history of the pieces seems to have been lost, including their dates of acquisition.) 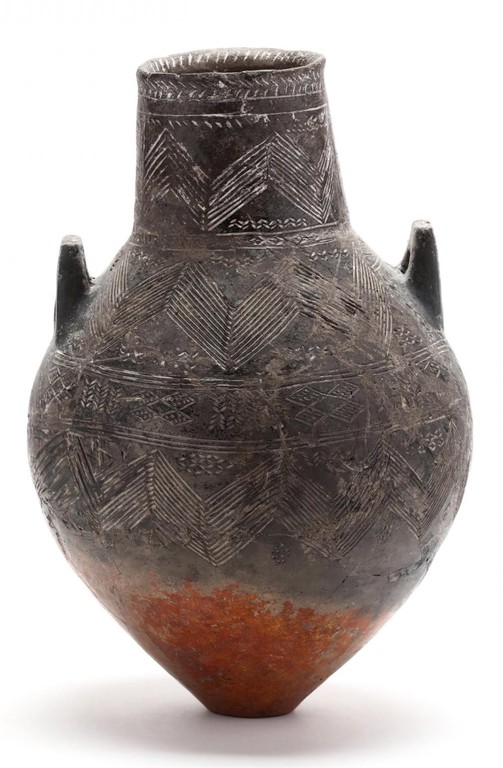